Kersey Priory was a priory in Kersey, Suffolk, England. It was founded before 1218 as a hospital dedicated St Mary the Blessed Virgin and St Anthony under rule of Austin Canons. It was dissolved in 1443 and the next year transferred to King's College, Cambridge. 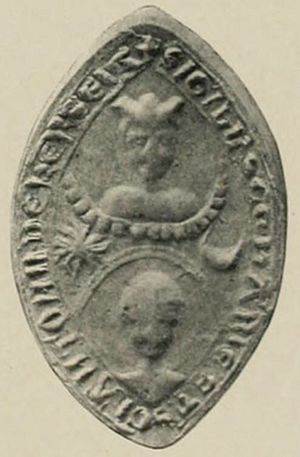 The twelfth-century seal of Kersey Priory is a pointed oval bearing a bust of the Blessed Virgin crowned in clouds, below is the head of St. Anthony between them is a sun and crescent moon. It has the legend round the edge of ‘Sigill' sce Marie et sci Antonii de Kerseia’

All content from Kiddle encyclopedia articles (including the article images and facts) can be freely used under Attribution-ShareAlike license, unless stated otherwise. Cite this article:
Kersey Priory Facts for Kids. Kiddle Encyclopedia.