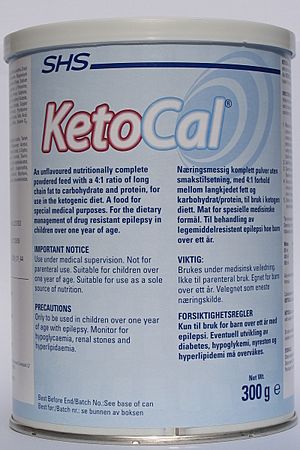 The diet forces the body to burn fats rather than carbohydrates for energy. Normally, the carbohydrates you eat are turned into glucose in the body, which is used for energy around the body and in the brain. But, if you don't eat enough carbohydrates, your body has a back-up system of burning fat instead. The liver can use stored fat and the fat you eat for energy. Stored fat is broken into two parts, fatty acids, and ketone bodies. Ketone bodies power the brain instead of glucose. This state of having a lot of ketone bodies in your blood is called "Ketosis."

The regular ketogenic diet has two to four times more fat by weight than protein, and very little carbohydrates every day. This means not eating foods that are made from starch or sugar. High-carbohydrate foods are foods like fruits, bread, pasta, grains, cookies, and ice cream. Also, you have to increase your intake of fatty foods, like oils, butter, and fatty meats. It's also important to not eat too much protein. You should only eat just enough protein so you don't lose muscles. Too much protein reduces the ketone bodies in your blood and blocks fat burning.

A ketogenic diet can be good for losing weight for most people, and is very good for treating seizures. A popular diet similar to the ketogenic diet is the Atkins Diet. Ketogenic diets have not been studied as much as regular diets, so we do not have as much information about them at this point. Compared to the diet that the American government suggests we should eat, there is a lot more fat and a lot less carbohydrate. Some people think this is a healthier way to live since you are eating less sugar, and the fat you eat can be used for energy right away, instead of being stored as body fat.

A ketogenic diet helps to stop seizures in children and can help people lose weight. Possible therapeutic uses for the ketogenic diet have been studied for many additional neurological disorders, some of which include: Alzheimer's disease, amyotrophic lateral sclerosis, autism, brain cancer, headache, neurotrauma, pain, Parkinson's disease, and sleep disorders.

The Johns Hopkins Hospital protocol for initiating the ketogenic diet has been widely adopted. It involves a consultation with the patient and their caregivers and, later, a short hospital admission. Because of the risk of complications during ketogenic diet initiation, most centres begin the diet under close medical supervision in the hospital.

All content from Kiddle encyclopedia articles (including the article images and facts) can be freely used under Attribution-ShareAlike license, unless stated otherwise. Cite this article:
Ketogenic diet Facts for Kids. Kiddle Encyclopedia.