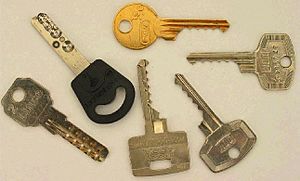 A key is an object used to open and close locks. Many things have locks, for example, doors. Keys are also used to turn on cars, machines and other things.

A key is used by placing the key into the slot of the thing you want to unlock.

A key that can open more than one lock (if each lock also has its own key) is called a master key or skeleton key.

The key was likely invented by Theodore of Samos in 6th Century BC.

All content from Kiddle encyclopedia articles (including the article images and facts) can be freely used under Attribution-ShareAlike license, unless stated otherwise. Cite this article:
Key Facts for Kids. Kiddle Encyclopedia.