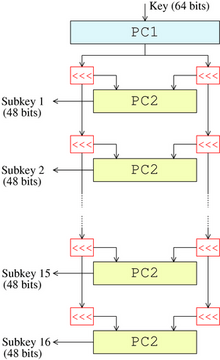 The key schedule of DES ("<<<" denotes a left rotation)

In cryptography, the so-called product ciphers are a certain kind of ciphers, where the decryption of data is done in "rounds". The general setup of each round is the same, except for some hard-coded parameters and a part of the cipher key, called a subkey. A key schedule is an algorithm that, given the key, calculates the subkeys for these rounds.

Some types of key schedules

All content from Kiddle encyclopedia articles (including the article images and facts) can be freely used under Attribution-ShareAlike license, unless stated otherwise. Cite this article:
Key schedule Facts for Kids. Kiddle Encyclopedia.