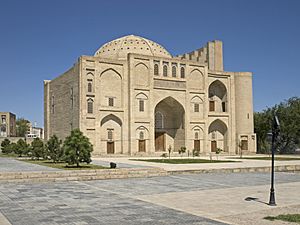 A khanqah is a building designed specifically for gatherings of a Sufi brotherhood or tariqa and is a place for spiritual retreat and character reformation. The first khanqah in India is located in Maner Sharif. It is established approx more than 800 years ago.

In the past, and to a lesser extent nowadays, they often served as hospices for saliks (Sufi travelers), Murids (initiates) and talibs (Islamic students). Khanqahs are very often found adjoined to dargahs (shrines of Sufi saints), mosques and madrasas (Islamic schools).

Sufi movements have been banned in some Muslim-majority countries such as Turkey, Iran, Saudi Arabia, or the communist and post-communist states of Central Asia. In these countries, khanqahs have been converted to other purposes, turned into museums or mosques. In other countries, Sufism survives and the old khanqahs are still in use.

All content from Kiddle encyclopedia articles (including the article images and facts) can be freely used under Attribution-ShareAlike license, unless stated otherwise. Cite this article:
Khanqah Facts for Kids. Kiddle Encyclopedia.