Kids Encyclopedia Facts
In this article, the family name is Khem. In accordance with Cambodian custom, this person should be referred to by the given name, Veasna.

In his engagement as a politician, initially, Veasna was a member of the Sam Rainsy Party, listed as a nominee since 1998 but not elected. Later, in 2003 he was elected as a representative for Prey Veng Province. As a representative of the Sam Rainsy Party, he held two offices, one in Ba Phnum District and another in Me Sang District. At that time he was 38 years old. He had started doing politics since before 1998, but he started understanding how to do it in the middle of second term.

Later, in 2005 he formed a political party called the League for Democracy Party. The party has been growing since it was founded in 2005 and has placed candidates in 844 communes – more than half of the Kingdom's total 1,646 – in the 2017 commune elections.

In the Sam Rainsy Party

Veasna was expelled from a program run by the National Democratic Institute due to a statement which was perceived as an insult to the monarchy, and as a potential violation of the Cambodian constitution. Veasna received criticism from his party members, including Sam Rainsy, who issued a statement of condemnation. Veasna defended himself saying that he did not mean to attack the monarchy, but was simply reciting historical facts.

The League for Democracy Party 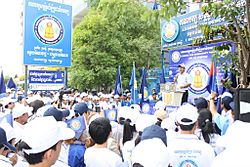 On 15 July 2005, the League For Democracy Party (LDP) was formed. It was registered and officially recognized by the announcement of the Ministry of Interior in 2006 and Veasna has served as its president since although he wants to limit the prime minister terms in Cambodia.

All content from Kiddle encyclopedia articles (including the article images and facts) can be freely used under Attribution-ShareAlike license, unless stated otherwise. Cite this article:
Khem Veasna Facts for Kids. Kiddle Encyclopedia.