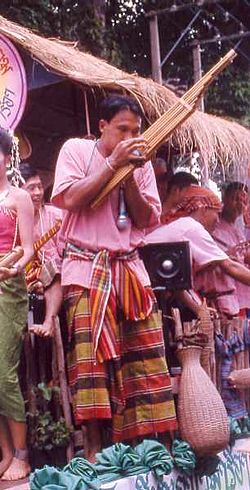 A khene player in Isan

The khene ( spelled "Can" in English; Lao: ແຄນ; Thai: แคน, RTGS: khaen Khmer: គែន - Ken; Vietnamese: khèn) is a Lao mouth organ whose pipes, which are usually made of bamboo, are connected with a small, hollowed-out hardwood reservoir into which air is blown. The khene is the national instrument of Laos. The khene music is an integral part of Lao life that promotes family and social cohesion and it was inscribed in 2017 on the UNESCO Representative List of the Intangible Cultural Heritage of Humanity. Today associated with the Lao people of Laos and Isan, other similar instruments date back to the Bronze Age. In Cambodia, it is used among the ethnic Lao population of the province of Stung Treng and is used in lakhon ken, a Cambodian dance drama genre that features the khene as the premiere instrument. In Vietnam, this instrument is used among the Tai peoples and the Muong people. The most interesting characteristic of the khene is its free reed, which is made of brass or silver. It is related to Western free-reed instruments such as the harmonium, concertina, accordion, harmonica, and bandoneon, which were developed beginning in the 18th century from the Chinese sheng, a related instrument, a specimen of which had been carried to St. Petersburg, Russia.

The khene has five different lai, or pentatonic modes with specific drone pitches, organized into two families (thang san and thang yao). The thang san family includes lai sutsanaen (G A C D E), lai po sai (C D F G A), and lai soi (D E G A B), while the thang yao family includes lai yai (A C D E G) and lai noi (D F G A C). Lai po sai is considered to be the oldest of the modes and lai sutsanaen the "Father of the Lai Khaen." Khene can be played as a solo instrument (dio khene), as part of an ensemble (such as wong pong lang and khene wong), or as an accompaniment to a Lao or Isan solo singer mor lam.

The khene has seven tones per octave, with intervals similar to that of the Western diatonic natural A-minor scale: A, B, C, D, E, F, and G. A khene can be made in a particular key but cannot be tuned after the reed is set and the pipes are cut.

The khene comes in several varieties:

In the United States, the top master khaen artist is a blind Laotian-born Bounseung Synanonh. Master Synanonh started playing the khaen at age twelve and later lost his eye sight at age 15. Master Synanonh immigrated to the U.S. as a refugee in the early 1980s. In 1987, he performed for President Reagan at the White House.  He also recorded with the World Music Institute under the direction of Terry Miller, a world-renowned ethnomusicologist.  In 2007, he performed at the Smithsonian Folklife Festival in Washington, D.C. In Thailand, one of the top virtuoso khaen soloists is the blind musician Sombat Simla. The instrument has also attracted a few non-Asian performers, including University of San Diego professor Christopher Adler, who also composes for the instrument; English musician Clive Bell (UK); Vancouver-based composer/performer Randy Raine-Reusch (Canada), who played khaen on Aerosmith's Pump (1989), Cranberries' To the Faithful Departed (1996), and Yes's The Ladder (1999); and Jaron Lanier (United States). Since the early 21st century, the California-born khaen player Jonny Olsen has achieved familiarity in Laos and Thailand by appearing on numerous Thai and Lao TV Shows and performing live concerts in Thailand and the U.S. Olsen is the first foreigner to win a khaen championship in Khon Kaen, Thailand in 2005. Stephen Molyneux (United States) has played the khaen on his releases The Arbitrary State (2010), The Stars Are the Light Show (2012), Wings and Circles (2016), and in select live performances. Molyneux bought a khaen in Bangkok in 2010 after developing an interest in the instrument while traveling in Laos and Thailand.

All content from Kiddle encyclopedia articles (including the article images and facts) can be freely used under Attribution-ShareAlike license, unless stated otherwise. Cite this article:
Khene Facts for Kids. Kiddle Encyclopedia.