A kill switch, also known as an emergency stop (e-stop) and as an emergency power off (EPO), is a safety mechanism used to shut off machinery in an emergency, when it cannot be shut down in the usual manner. Unlike a normal shut-down switch or shut-down procedure, which shuts down all systems in order and turns off the machine without damage, a kill switch is designed and configured to abort the operation as quickly as possible (even if it damages the equipment) and to be operated simply and quickly so that even a panicked operator with impaired executive functions or a by-stander can activate it. Kill switches are usually designed to be noticeable, even to an untrained operator or a bystander.

Most kill switches feature a removable, protective barrier against accidental activation (e.g. a plastic cover that must be lifted or glass that must be broken). Kill switches are features of mechanisms whose normal operation or foreseeable misuse might cause injury or death; industrial designers include kill switches because damage to or the destruction of the machinery is less important than preventing workplace injuries and deaths.

A similar system, usually called a dead man's switch, as its name suggests, is a device intended to stop a machine (or activate one) if the human operator becomes incapacitated, and is a form of fail-safe. They are commonly used in industrial applications: e.g., locomotives, tower cranes, freight elevators and consumer applications: e.g., lawn mowers, tractors, personal water craft, outboard motors, snowblowers, motorcycles and snowmobiles). The switch in these cases is held by the user, and turns off the machine if they let go. Some riding lawnmowers have a kill switch in the seat which stops the engine and blade if the operator's weight is no longer on the seat. 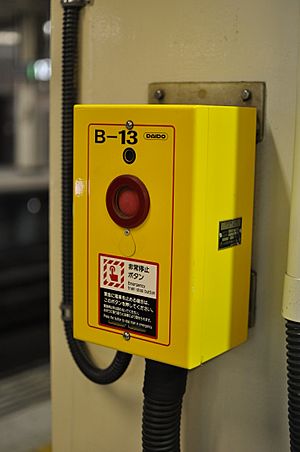 An emergency switch in Japan

A kill switch is used for gasoline pumps or any other device that pumps large amounts of explosive or flammable chemicals. There is commonly a single kill switch for all pumps at a pumping station. A kill switch in a nuclear reactor plant is called SCRAM.

Treadmills often use a safety key with one end magnetically attached to the machine and the other end clipped to the user's waist. If the safety key is pulled out, such as in the event of a fall, the treadmill stops immediately. In other cases, some other treadmills have a more traditional kill switch, often mounted towards the rear of one of the hand railings.

In smartphones, a kill switch is a security feature that allows the phone's owner to remotely render the smartphone inoperable if it is lost or stolen. From 2015 this feature is legally required in California for smartphones. There also is a debate about implementing kill switches in robots and advanced artificial intelligence systems.

All content from Kiddle encyclopedia articles (including the article images and facts) can be freely used under Attribution-ShareAlike license, unless stated otherwise. Cite this article:
Kill switch Facts for Kids. Kiddle Encyclopedia.