Killisnoo was an unincorporated community on Killisnoo Island in the Hoonah-Angoon Census Area in the U.S. state of Alaska, near Angoon which is on Admiralty Island. It is noted to have had a post office which closed in 1930. It has also been known by several names which include Kanas-nu, Kanasnu, Kenasnow and Killishoo. 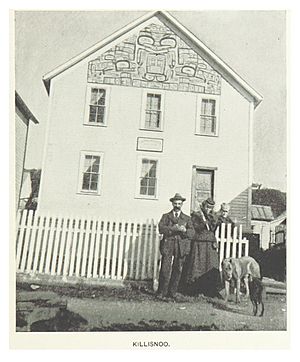 Killisnoo Island has long been inhabited by Tlingit people. In the late 1800s, the North West Trading Company built a fish processing plant at Killisnoo and many Tlingit moved from nearby Angoon and other areas to Killisnoo to work at the plant. The plant was destroyed in a fire in 1928 and most of the residents left Killisnoo.

The St. John the Baptist Church in Killisnoo was destroyed by fire in 1927, and the congregation built a new church in Angoon.

Like Angoon, Killisnoo has a less-rainy climate than most of southeastern Alaska, which is why Killisnoo is now the home of a fishing and hunting establishment by the name of Whaler's Cove Lodge.

Killisnoo first appeared on the 1890 U.S. Census as an unincorporated village of 79 residents. Although it was considered to be a Tlingit village, Whites outnumbered Tlingits by 44 to 33, with 2 Asians. It continued to appear until 1940, when most of the residents left. It was later annexed into the neighboring city of Angoon.

All content from Kiddle encyclopedia articles (including the article images and facts) can be freely used under Attribution-ShareAlike license, unless stated otherwise. Cite this article:
Killisnoo, Alaska Facts for Kids. Kiddle Encyclopedia.