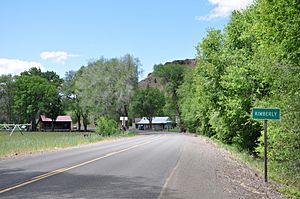 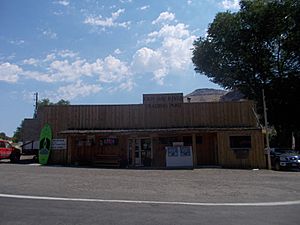 Kimberly is an unincorporated community in Grant County, Oregon, United States. It is located at the intersection of Oregon Route 19 and Oregon Route 402 and the confluence of the John Day and the North Fork John Day rivers.

Kimberly was named after the prominent local Kimberly family. Orin Kimberly established the first commercial orchard in the area in the 1930s.

This region experiences warm (but not hot) and dry summers, with no average monthly temperatures above 71.6 °F. According to the Köppen Climate Classification system, Kimberly has a warm-summer Mediterranean climate, abbreviated "Csb" on climate maps.

All content from Kiddle encyclopedia articles (including the article images and facts) can be freely used under Attribution-ShareAlike license, unless stated otherwise. Cite this article:
Kimberly, Oregon Facts for Kids. Kiddle Encyclopedia.