The King's Royal Hussars (KRH) is a cavalry regiment of the British Army. It is part of the Royal Armoured Corps. The regiment was formed in 1992 and is based at Tidworth. It serves as the armoured regiment of the 12th Armoured Infantry Brigade.

Under Army 2020 Refine, it will exchange its Challenger 2 tanks for Ajax vehicles. 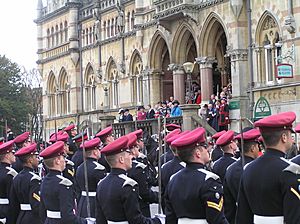 The regiment was formed on 4 December 1992 by the amalgamation of two other regiments:

The regiment was based at York Barracks in Münster at the time of amalgamation from where it deployed units to Northern Ireland on Operation Banner in June 1994 and to Bosnia and Herzegovina in January 1996: it spent its time as part of 2nd Canadian Multi National Brigade and was awarded the Canadian Forces' Unit Commendation - the first time that this had been awarded to a foreign unit. 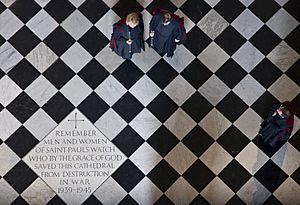 The regiment has deployed units to Bosnia, Herzegovin and Kosovo and also units to Northern Ireland and Iraq - Operation Telic and Operation Herrick.

The regiment wear the crossed kukri of the Gurkhas as an arm badge. This relates back to 1945 when C Squadron, 14th/20th King's Hussars assaulted the town of Medicina in Italy alongside the 2nd Battalion, 6th Gurkha Rifles, inflicting heavy losses on the German defenders despite being outnumbered. In commemoration of this action the 14th/20th King's Hussars adopted the crossed kukri badge, a tradition maintained by the regiment.

All content from Kiddle encyclopedia articles (including the article images and facts) can be freely used under Attribution-ShareAlike license, unless stated otherwise. Cite this article:
King's Royal Hussars Facts for Kids. Kiddle Encyclopedia.