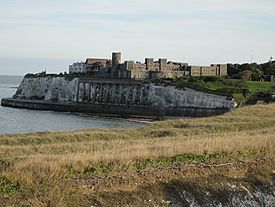 Kingsgate Castle looking across Kingsgate Bay. The North Foreland lighthouse is just visible on the right of the photo. 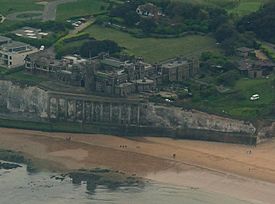 Kingsgate Castle on the cliffs above Kingsgate Bay, Broadstairs, Kent, was built for Lord Holland (Henry Fox, 1st Baron Holland) in the 1760s as the stable block of his nearby country residence Holland House. His main residence was Holland House in Kensington, near London. The name Kingsgate is related to an incidental landing of Charles II on 30 June 1683 (‘gate’ referring to a cliff-gap) though other English monarchs have also used this cove, such as George II in 1748. The building was later the residence of John Lubbock, 1st Baron Avebury.

Architects obtained complex planning consent in the 1990s for conversion of the castle into 31 flats, aesthetic enhancements and functional changes, built soon afterwards.

All content from Kiddle encyclopedia articles (including the article images and facts) can be freely used under Attribution-ShareAlike license, unless stated otherwise. Cite this article:
Kingsgate Castle Facts for Kids. Kiddle Encyclopedia.