Broadstairs is a coastal town on the Isle of Thanet in the Thanet district of east Kent, England, about 80 miles (130 km) east of London. It is part of the civil parish of Broadstairs and St Peter's, which includes St Peter's and had a population in 2011 of about 25,000. Situated between Margate and Ramsgate, Broadstairs is one of Thanet's seaside resorts, known as the "Jewel in Thanet's crown". The town's crest motto is Stella Maris ("Star of the Sea"). The name derives from a former flight of steps in the chalk cliff, which led from the sands up to the 11th-century shrine of St Mary on the cliff's summit.

The town spreads from Haine Road in the west to Kingsgate (named after the landing of King Charles II in 1683) a hamlet in St Peter parish in the north and to Dumpton in the south (named after the yeoman Dudeman who farmed there in the 13th century). The hamlet of Reading (formerly Reden or Redyng) Street was established by Flemish refugees in the 17th century.

The inland village of St Peter's was established after the building of a parish church in about 1080. The coastal confederation of Cinque Ports during its mediæval period consisted of a confederation of 42 towns and villages in all. This included St Peter's, as a 'limb' of Dover. On the nearby coast was a cliff-top shrine, the Shrine of Our Lady, at what was then called Bradstow(e), meaning "broad place" (perhaps referring to the wide bay).

A fishing settlement developed in the vicinity of the shrine in the 14th century. This came to be called "Broadstairs", after a flight of steps which was made in the cliff to give access to the shrine from the bay. Older forms of the name include Brodsteyr Lynch (1434 & 1494 ), Brodestyr (1479), Broadstayer (1565) and Brod stayrs (1610). Charles Culmer, son of Waldemar, is supposed to have reconstructed the stairs in 1350. 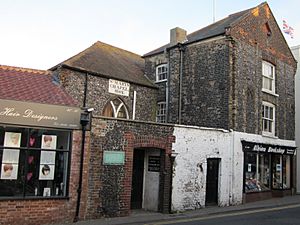 St Mary's chapel was built on the site of the shrine.

In 1440, an archway was built by George Culmer across a track leading down to the sea, where the first wooden pier or jetty was built in 1460. A more enduring structure was to replace this in 1538, when the road leading to the seafront, known as Harbour Street, was cut into the rough chalk ground on which Broadstairs is built, by another George Culmer. Going further in defence of the town, he built the York Gate in 1540, a portal that still spans Harbour Street and which then held two heavy wooden doors that could be closed in times of threat from the sea. Richard Culmer was the son of Sir Richard Culmer by his first wife and was born in 1640/41.

Richard was buried in the parish church of Monkton, on the Isle of Thanet. Of his legacies was the endowment on Broadstairs of an area of six acres (24,000 m²) of ground for the poor of the parish. The name survives to this day as "Culmer's Allotment" as does the allotment.

In 1823, Broadstairs had a population of about 300. A brief outline of the history of Broadstairs Pier is given in Broadstairs, past and present, which mentions a storm in 1767, during which Culmer's work was all but destroyed. At this time, it was of considerable importance to the fishing trade with catches as far afield as Great Yarmouth, Hastings, Folkestone, Dover and Torbay and elsewhere being landed. It had become so indispensable that the corporations of Yarmouth, Dover, Hythe and Canterbury with assistance from the East India Company and Trinity House subscribed to its restoration with a payment of £2,000 in 1774.

By 1795, York Gate needed repair to repel any threat from the French Revolutionary Wars. The subsequent renovation was undertaken by Lord Hanniker in the same year as the first lightvessel was placed on the Goodwin Sands.

On the occasion of the landing at Thanet of Major Henry Percy of the 14th Dragoon Guards, on 21 June 1815 with the captured French eagle standard taken at Waterloo, a tunnel stairway from the beach to the fields on the cliff tops above was excavated, and christened "Waterloo Stairs" to commemorate the event. Broadstairs was supposedly the first town in England to learn of this historic victory, although there is no written evidence of this.

Smuggling was an important industry in the area, and the men of Broadstairs and St Peter's became very good at outwitting customs agents. This was very profitable because of the very high duty payable on tea, spirits and tobacco. There is a network of tunnels and caves strewn in the chalk strata which were used by smugglers to hide their contraband.

Development as a seaside resort

By 1824 steamboats were becoming more common, having begun to make over from the hoys and sailing packets about 1814. These made trade with London much faster. The familiar sailing hoys took anything up to 72 hours to reach Margate from London, whereas the new steamships were capable of making at least nine voyages in this time.

Mixed feelings must have been strongly expressed by the Thanet boatmen in general, as the unrivalled speed of the steam packet was outmanoeuvring all other classes of vessel, but it brought a new prosperity to Thanet. In the middle of the 19th century, the professional classes began to move in. By 1850, the population had reached about 3,000, doubling over the previous 50 years. Due to the fresh sea air, many convalescent homes for children opened towards the end of the 19th century.

Although numerous holidaymakers were attracted to Broadstairs and to other Thanet seaside towns during the Victorian era, it was not directly served by the railways until 1863. This was a time of great expansion for railways in the South East; in 1860 Victoria Station had been completed, followed by Charing Cross and Cannon Street. Rail access to Broadstairs had previously relied heavily upon coach links to other railway stations in the district or region; with firms such as Bradstowe Coachmasters, operated by William Sackett and John Derby, principally involved. Their coaches connected Broadstairs to Whitstable station where a railway service had begun as early as 1830 (one of the first in England, with its pioneering Stephenson's engine Invicta).

By 1851, the region's network was still more complete, being supplemented by the London to south coast route, including the coastal link from Chichester to Ramsgate, the cross-country service between London and Dover and the Mid-Kent line that linked Redhill, Tonbridge and Ashford to London's first Eurostar terminal at Waterloo (opened in 1848). Broadstairs station (unlike neighbouring Margate) is a 10-minute walk from the beach. Although rebuilt in the 1920s, electricity was not installed at the station until well into the 1970s, and the buildings and platforms remained illuminated by gaslight until then.

Since 2009 Southeastern have been operating a high speed train service between London St Pancras and Ashford International which runs on to Broadstairs cutting about 40 minutes from what was once a two-hour journey to other termini in London.

In 1841, 44 mariners were recorded as resident in Broadstairs; nine of these being specified as fishermen, and of course the residual boat-building activity that remained after the Culmer White yard closed in 1824 (under pressure from the steamships), still continued (though there were only four shipwrights recorded in the census: Solomon Holbourn and Joseph Jarman among them). Others may have been at sea on census day: Steamer Point, as the pier head at Broadstairs was then known, would have been fairly busy with shipping movements since consignments of coal and other produce would have been traded along the coast and there would have been regular work on the steam packet to and from Ramsgate. By the 1840s, the smuggling had ceased.

By 1910, the population had reached about 10,000. A "guide book" of the 1930s by A.H. Simison (the photographic chemist) entitled Ramsgate (The Kent Coast at its best) Pictorially Presented, describes Broadstairs town as having approached modernisation and urban development "always with a consistent policy of retaining those characteristics for which it has for so long been renowned". The town has retained a great many aspects of historical interest, besides its maritime history. Amongst these is its notable religious history, evoked by places such as the Shrine of Our Lady, Bradstowe.

Today Broadstairs is a magnet for visitors year after year and has been likened to a "Cornish fishing town".

Lifeboats arrived in Broadstairs in 1851. News of the loss of the Irish packet Royal Adelaide with 250 lives, on the sands off Margate on 6 April 1850, may have been the prompt that led old Thomas White to present one of his lifeboats to his home town of Broadstairs that summer. The lifeboat saw its first use on 6 March 1851, when the brig Mary White became trapped on the Goodwin Sands during a severe gale blowing from the north. A ballad was written to celebrate the occasion, "Song of the Mary White".

Solomon Holbourn, coxswain of the Mary White of Broadstairs had an aunt, Sophia who married at Folkestone in 1813 to William Stevenson. His eldest son William became a mariner and boatman, and married an Elizabeth Wellard in 1839 at St Peter's, Broadstairs. One of their children, born in 1848, was named after his father, William, but in his adult life was better known as Bill "Floaty" Stevenson, and as a member of the Frances Forbes Barton lifeboat crew. The "Frances Forbes Barton" was originally, in 1897, the legacy of a Miss Webster to the boatmen of Broadstairs. It is recorded as having remained at that station until 1912, when it was moved to the Walmer station when the Broadstairs one closed, during which time it had been taken out on 77 launches and saved 115 lives, by far the most effective of the RNLI craft stationed there.

Broadstairs' lifeboats were further supported by a fund established in the 1860s by Sir Charles Reed FSA. 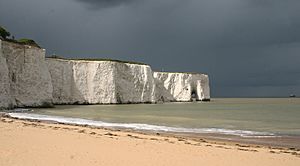 The town lies above a harbour with cliffs on either side. It has seven bays of golden sand, which are (from south to north) Dumpton Gap, Louisa Bay, Viking Bay, Stone Bay, Joss Bay, Kingsgate Bay and Botany Bay. North Foreland rises between Stone Bay and Joss Bay.

On the cliffs above Kingsgate Bay is Kingsgate Castle, formerly part of the estate of Lord Holland but now converted into private residences.

The town is also served by Southeastern train services to/from London, via either North Kent and Medway or Canterbury and High Speed 1. It is unusual in that trains to London can run either way through the station. 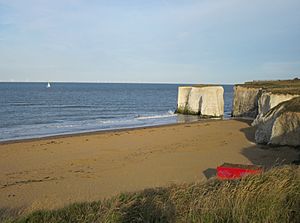 All content from Kiddle encyclopedia articles (including the article images and facts) can be freely used under Attribution-ShareAlike license, unless stated otherwise. Cite this article:
Broadstairs Facts for Kids. Kiddle Encyclopedia.