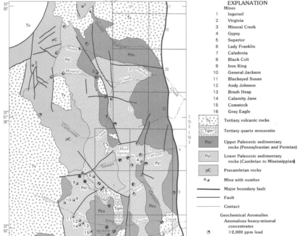 Kingston is a census-designated place in Sierra County, New Mexico, United States. Its population was 32 as of the 2010 census. The community is located in the Black Range along New Mexico State Road 152.

Jack Sheddon discovered silver in what would become the Solitaire Mine in 1882. Originally called Percha City, Kingston was surveyed the same year and soon had a population of 1800. Lillian Russell once performed here.

The Depression of 1893 curtailed mining activities in the area, though there was a brief resurgence during World War II. By 1952 however, most production had ceased.

The Iron King, Empire, and Brush Heap were some of the first mines in the area. Most production was within 460 feet of the surface in the supergene zone. Ore minerals included cerargyrite, native silver, polybasite, and argentiferous galena. From 1952 to 1959, 5,689 tons of manganese ore were produced from the Fusselman Dolomite, mainly from the Iron King Mine. Pyrolusite is the main manganese ore mineral.

Ore deposits occurred mainly along major fault fissure veins. These faults may represent the outer margin of the Emory Caldera. Most mineralization occurred in the Late Oligocene.

The Lady Franklin Mine was the largest producer of high-grade silver from 1880 to 1893, averaging 15 ounces per ton.

All content from Kiddle encyclopedia articles (including the article images and facts) can be freely used under Attribution-ShareAlike license, unless stated otherwise. Cite this article:
Kingston, New Mexico Facts for Kids. Kiddle Encyclopedia.