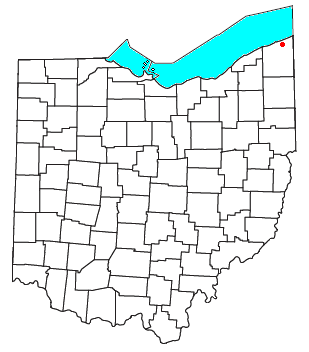 Kingsville is a census-designated place in central Kingsville Township, Ashtabula County, Ohio, United States. It has a post office with the ZIP code 44048. It lies at the intersection of State Routes 84 and 193, less than one mile northwest of Interstate 90.

Kingsville was originally called Fobesdale or Fobesville, and under the latter name was laid out in 1810.

Kingsville was a location used for the filming of The Dark Secret of Harvest Home.

All content from Kiddle encyclopedia articles (including the article images and facts) can be freely used under Attribution-ShareAlike license, unless stated otherwise. Cite this article:
Kingsville, Ohio Facts for Kids. Kiddle Encyclopedia.