The Kinnaird College for Women (KCW) is a public college located in Lahore, Punjab, Pakistan. It is a women's liberal arts college.

Kinnaird was established in 1913 by the Zenana Bible and Medical Mission. In 1919, Presbyterian Mission Church and the Church Mission Society joined a consortium to fund and operate the college. It, in 1926, moved to its current campus on the Jail Road, where it grew over the years and by 1939 the college had grown into a 20-acre (81,000 m2) campus.

The college was established at the start of the 20th century when it was housed near Kinnaird High School.

Kinnaird College, the premier women's college in Pakistan, was founded in 1913 by the Zenana and Bible Medical Mission, now called Interserve. The American Presbyterian Mission and the Church Missionary Society joined in 1919 to make Kinnaird a union institution. Others followed. From 1913 to 1922 the college was the only women's liberal arts college in the Punjab. 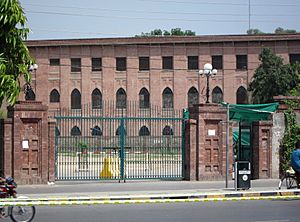 A view of Kinnaird College

The college moved to Jail Road in 1926 after it was determined that more space was needed. In 1933, the college acquired land near Lahore's canal and buildings were constructed to house the increasing numbers of young women studying at the college. By 1939 the college had grown into a 20-acre (81,000 m2) campus.

All content from Kiddle encyclopedia articles (including the article images and facts) can be freely used under Attribution-ShareAlike license, unless stated otherwise. Cite this article:
Kinnaird College for Women Facts for Kids. Kiddle Encyclopedia.