“It Wasn’t God Who Made Honky Tonk Angels” would also be her first of several pop cross over hits. Wells is the only female artist to be awarded top female vocalist awards for 14 consecutive years. Her chart topping hits continued until the mid-1960s, paving the way for and inspiring a long list of female country singers who came to prominence in the 1960s.

Wells ranks as the sixth-most successful female vocalist in the history of the Billboard country charts. In 1976, she was inducted into the Country Music Hall of Fame. In 1991, she became the third country music artist, after Roy Acuff and Hank Williams, and the eighth woman to receive the Grammy Lifetime Achievement Award.

Her accomplishments earned her the nickname "Queen of Country Music". 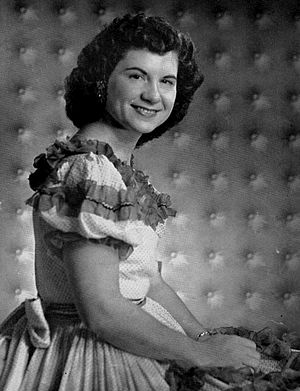 Wells was born in Nashville, Tennessee and began singing as a child, learning guitar from her father. Her father, Charles, and his brother were musicians and her mother, Myrtle, was a gospel singer. As a teenager, she sang with her sisters, who performed under the name the Deason Sisters on a local radio station beginning in 1936. 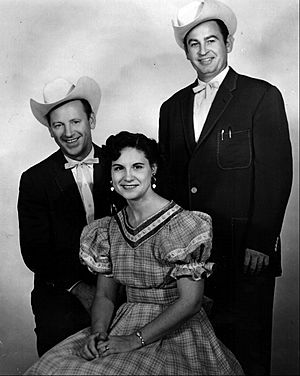 Carol Sue released a single with Wells in the mid-'50s titled "How Far Is Heaven", which peaked at No. 11 on the Billboard Country Chart. While two of Wells' children pursued music careers, Carol Sue did not, but she recorded numerous songs with her family, including performing with Ruby as The Wright Sisters.

Wells and her husband were lifelong members of the Church of Christ. The couple celebrated their 70th wedding anniversary in 2007 by visiting the small courthouse at which they were married in Franklin, Kentucky. Kitty and Johnnie were married 74 years before Johnnie’s death in 2011.

Kitty Wells died on July 16, 2012 in Madison, Tennessee, from complications of a stroke. She was 92. She is buried at Spring Hill Cemetery in Nashville, Tennessee, alongside her husband. 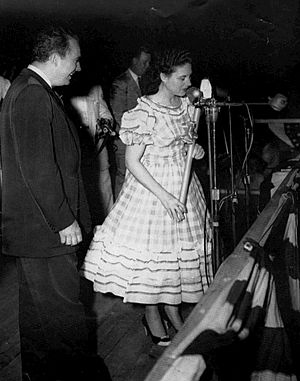 All content from Kiddle encyclopedia articles (including the article images and facts) can be freely used under Attribution-ShareAlike license, unless stated otherwise. Cite this article:
Kitty Wells Facts for Kids. Kiddle Encyclopedia.