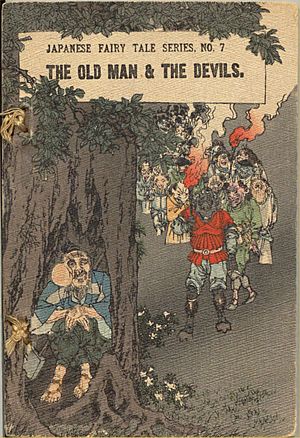 Old man with lump sees the oni marching.
―Cover of the 1886 translation.

"Kobutori Jiisan" (こぶとりじいさん, Kobutori jīsan) literally "Lump-removing Old Man" is a Japanese Folktale about an old man who lost his lump (or wen) after joining a party of demons (oni) celebrate and dance for a night.

The tale is a rendition of a tale about a woodcutter (firewood-gatherer) from the early 13th-century anthology Uji Shūi Monogatari. 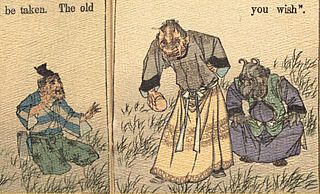 The man's lump is taken by the oni (devils). 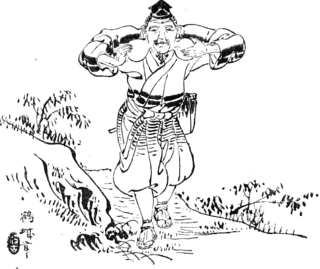 One day he went into the mountain to cut wood, and was caught in the rain. He took refuge in the hollow of a tree. He was soon to witness a gathering of strange beings nearby, some one-eyed and some mouth-less. They were the oni (demons or ogres; "devils" being the Christendom equivalent).

The oni created a great bonfire as light as day. The began to drink sake wine, sing and dance. They old man overcame his fears and was lured to join the dance. The greatly entertained oni wanted him to return the next day (or "always") for an encore. To ensure the old man's return, the oni wanted keep custody of some valuable possession, and of all things, decided the old man's lump should be taken as pledge. They then proceed to remove the unwanted tumor. The old man was elated to find the lump gone, with not a remnant of it remaining, and no soreness in the cheek where it was removed.

There lived next door an old man who had a big lump on his left cheek. When he heard his neighbor's story about losing the lump, he wanted to emulate, and therefore asked to take the place of performing in front of the oni, and the neighbor yielded him the opportunity. The left-lump old man went to the same tree hollow, and when the oni assembled, the chief demon was particularly eagerly awaiting. Unfortunately, the left-lump old man did not have the same level of skill in the art of dancing, and was a disappointment to the demons, who bid him to take back his lump and leave. And the demons slapped on (or threw) the piece of flesh which stuck to the clean side of his face, and this old man returned home chagrined, now with two lumps on his face.

This folktale can be traced to the tale collection Uji Shūi Monogatari compiled in early 13th century. The medieval version has been translated as "How Someone Had a Wen Removed by Demons".

Here the man explicitly "made his living gathering firewood". The oni demons are of assorted variety, and some are picturesquely described: red ones wearing blue, black ones wearing red and sporting loincloths (or wearing a red loincloth), some one-eyed, and some mouthless. The medieval version concludes with a one-liner moral cautioning against envy. Also it is added in the variant text that the lump was the size of an orange (大柑子, ōkōji), and this prevented him from engaging in a profession that mingles with people. It is speculated this refers to the citrus variety known today as natsumikan.

The version given by A. B. Mitford in 1871 "The Elves and the Envious Neighbour" features two men with a wen on the forehead, and the second visitor earns another wen on top of his own. The second man could not be faulted for his poor dancing or companionship, and it was just a case of mistaken identity. Mitford"s version also concludes with a moral against envy.

Another variant called The tumor doubled (瘤二つ, Kobu futatsu), where the protagonist priest has a tumor over the eye, was collected by Kunio Yanagita. Here, the tumor is taken by the tengu ("long-nosed demons"), and given to a second priest with a tumor. Here again, the second priest suffered his ill fate despite his dancing being entertaining enough. The locality of the tale was not given.

The kobutori tale has been finely classified as tale type AT 503A "The Gifts of the Tengu" by Hiroko Ikeda, but is type 503 "The Gifts of the Little People" for purposes of cross-referencing international analogues.

There is a Chinese analogue to be found in Chinese: Yang Maoqian's book Chinese: Xiaolinping (1611). A version written in Chinese also occurs in Sango (産語) edited by Dazai Shundai [ja] and published 1749, and purports to be a reprint of texts lost before the Han Dynasty, but the general consensus is that this is "faked/mocked ancient text" (疑古文) by the editor.

A number of specimens of the analogous tale also occurs in Korea. Tōru Takahashi [ja] translated one version of the Korean Kobutori (1910). Here the first old man deceives the goblins (dokkaebi) and sells off his lump as the source of his bel canto voice. The second old man with a lump was a fine singer too, but receives the detached lump which goblins discovered to be useless. Chʻoe In-hak's selected anthology (1974) also includes a kobutori tale (in Japanese).

The tale in Hangul, entitled Hogtten-iyagi or "Wen-taking story" (Hangul: 혹뗀이야기) was later printed in the 1923 edition of the Korean-language Reader, which also gave an illustration of the goblin. But the textbook was issued under Japanese control (Government-General of Korea). Kim Jong-dae of Chung-Ang University who is an expert on the Korean goblin thinks the tale was imported into Korea from Japan in the Colonial Period (1910–1945).

However, scholar Bak Mikyung who earned her doctorate at Kyoto University, has pointed out that if the story "The Story of Hok Lee and the Dwarfs" printed by Andrew Lang in 1892 is a Korean tale, this would set the date of its establishment in Korea to at least the pre-colonial era. Although Lang represents the tale as translated from the Chinese (it is also set in China), the protagonist's name Hok means "wen" or "lump" in Korean and may indicate its actual origins.

Charles Wycliffe Goodwin noticed that the Japanese "Kobutori" tale closely paralleled the Irish "The Legend of Knockgrafton", presenting his finding in 1875, though this was not printed for the public at large until 1885. The Irish tale had been published by Thomas Crofton Croker c. 1825, and Goodwin first noticed the similarity after reading Mitford's brief version of the Japanese tale. Goodwin subsequently obtained a fuller version of the story which he printed in his paper. The resemblance of "The Legend of Knockgrafton" to the Japanese folktale was also noted by Joseph Jacobs in 1894. Moreton J. Walhouse, another jurist serving in India, also regurgitated this parallel in a 1897 paper entitled "Folklore Parallels and Coincidences".

Joseph Bédier in 1895 noted the resemblance between the Japanese tale and a tale from Picardy which contains the same formula as the Irish one: the fairies sing the beginning days of the week, and the second hunchback upsets them by adding days.

All content from Kiddle encyclopedia articles (including the article images and facts) can be freely used under Attribution-ShareAlike license, unless stated otherwise. Cite this article:
Kobutori Jiisan Facts for Kids. Kiddle Encyclopedia.