The Kodak Tower has long been recognized as a landmark in the Rochester Skyline, and an icon in the world of film photography. The building has also been called the "nerve center of photography".

The Eastman Kodak Company owns the skyscraper, and it remains the company's headquarters. In 2008, Kodak undertook work to repair and restore the exterior of the building.

The Kodak Tower was constructed on the site of a former factory next to several seven story Camera Works buildings that clustered around the site. Construction began in 1912 and was completed in 1914 with Kodak founder George Eastman presiding over the project. Upon its completion in 1914, the tower held the title of the tallest building in Rochester, New York until the 1960s.

Kodak Tower was designed by Howard Wright Cutler and Gordon & Kaelber Architects with a French Renaissance style. When construction began in 1912, the building was designed as a 16-story high-rise with a steel skeleton faced with terra cotta. The building overtook the Powers Building to become the tallest building in the city upon its completion in 1914. 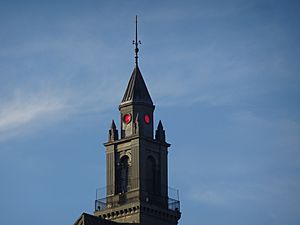 In the late 1920s, the architects of the Genesee Valley Trust building announced plans to mount an architectural feature that would threaten the Kodak Tower's status as the city's tallest building. Following the announcement Eastman Kodak hired an architect to construct 3 more floors on the building with a mansard roof and aluminum tower bringing the tower to a height of 366 ft (111.6 m) feet in 1935.

In 1994 Dennis Money, the founder of the Rochester Peregrine Falcon Project, got permission from Kodak to install a nest box on the spire of the Kodak Office Tower. The nest box was installed as part of an effort to reintroduce peregrine falcons to eastern North America after the species was listed on the U.S. Endangered Species list.

In 1998 a pair of peregrine falcons known to the public as Mariah & Cabot-Sirocco began nesting in the nest box. The reintroduction effort became popular over the web after Brad Carney an IT Consultant at Eastman Kodak coordinated an effort to install web cams around the nest and made the web cam imagery available on the web for the public to view. The web cam quickly became a popular attraction on the Kodak website.

Mariah hatched 43 falcon chicks at the top of the Kodak Tower until the nest box was relocated to the Times Square Building in 2008 when Eastman Kodak announced plans to do extensive restoration work on the Tower. 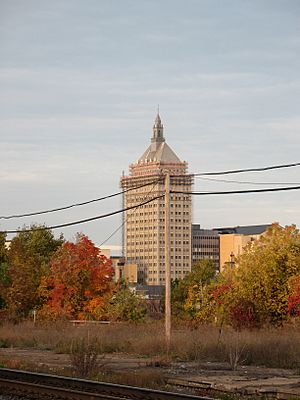 Kodak Tower Under Renovation in 2008

Kodak Tower is 340 ft (103.6 m) tall to its roof and reaches a full height of 366 ft (111.6 m) tall. The building has 19 floors of commercial office space occupied exclusively by the Eastman Kodak Company. Atop the building is an 18th and 19th floor balcony with a steep gothic steeple and a lightning rod with the initials EK for Eastman Kodak at the very top of the building.

A block letter sign that spells out the company name KODAK is displayed at the roof level of the north and the south sides of the tower. Throughout the night the sign is lit up with red neon lights. In addition to the sign, the tower's 18th and 19th balcony facade is lighted during special occasions such as sporting events and holidays.

On June 13, 2008, Eastman Kodak announced that it would repair and restore the tower's exterior. The building needed urgent repairs due to deterioration in the masonry in many locations on the tower which threatened the building's safety and integrity. The restoration was completed in 2010.

Panorama of Rochester skyline as seen from Kodak Tower

All content from Kiddle encyclopedia articles (including the article images and facts) can be freely used under Attribution-ShareAlike license, unless stated otherwise. Cite this article:
Kodak Tower Facts for Kids. Kiddle Encyclopedia.