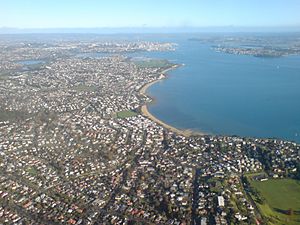 Looking west over the Eastern Beaches, Kohimarama in the middle distance. The three beaches are: in the foreground St Heliers, then Kohimarama, lastly Mission Bay.

Kohimarama is a coastal residential Auckland suburb, located to the east of the city, with many homes having some of the best views across the Auckland Harbour. Kohimarama is situated between Mission Bay and St Heliers and has an accessible beach with a boardwalk and green recreational spaces located amongst residential areas. According to the 2013 census, Kohimarama has a population of 7092. Local government of Kohimarama is the responsibility of the Orākei Local Board, which also includes the suburbs of Orākei, Mission Bay, St Heliers, Glendowie, St Johns, Meadowbank, Remuera and Ellerslie.

Kohimarama used to be part of the Kohimarama Block, land acquired by European settlers from the indigenous Māori. This was a large area, from Orakei-Mission Bay to the Tamaki River and from the Waitematā Harbour to the outskirts of Panmure. Kohimarama’s former name was Waiparera, ‘duck water’, as the area was a breeding ground of the parera, the wild grey duck. This name was used by the Māori and by the European settlers, the Pākehā, until 1870. Arriving in Auckland in 1841, William Field Porter, was a month too late for the first Government auction, but became the first settler in today’s Kohimarama after the second auction. Then the area consisted of a lagoon, a raupo swamp and the Kohimarama beach, the longest beach in the Harbour. Porter sent men to clear, fence and drain the area. One of these men was Thomas Kemp, later to be a landowner of the neighbouring suburb, Mission Bay.

The Kohimarama Wharf was built in 1912 on the Pipimea Head between Kohimarama and Mission Bay. The first business in Kohimarama was a tearoom which catered to the people arriving at the newly built wharf. The access to the wharf was not easy; people had to walk around the rocks to and from the wharf which ultimately led to the building of the road now known as Tamaki Drive.

From 1892 to 1919, Kohimarama was also known as the ‘Jockey Bay’, since the area was used as a training ground for race horses. In 1919, the stables were moved to Ronaki Road, Mission Bay, and the land in Kohimarama was leased to W.H. Madill, a dairy farmer.

Today, Kohimarama is one of the quieter beaches along Tamaki Drive with some cosy cafes present along the beach front. The Kohimarama Yacht Club is located on Tamaki Drive. This club was set up in 1939 for young people and the construction of the club house at Gower’s Point, between the Kohimarama and Saint Heliers, was finished in 1957.

All content from Kiddle encyclopedia articles (including the article images and facts) can be freely used under Attribution-ShareAlike license, unless stated otherwise. Cite this article:
Kohimarama Facts for Kids. Kiddle Encyclopedia.