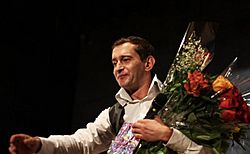 Khabensky was born and trained in Leningrad. Before Night Watch, he was already a famous actor in his country. He had appeared in several movies and TV series and theatres. Since 2003, he has been a member of the Moscow Art theatre.

All content from Kiddle encyclopedia articles (including the article images and facts) can be freely used under Attribution-ShareAlike license, unless stated otherwise. Cite this article:
Konstantin Khabensky Facts for Kids. Kiddle Encyclopedia.