Konstantine Demetrios "Kostas" Koufos (Greek: Κωνσταντίνος Δημήτριος "Κώστας" Κουφός; born February 24, 1989) is a Greek-American professional basketball player who last played for Olympiacos of the EuroLeague. He played one season at Ohio State before being selected by the Utah Jazz with the 23rd overall pick in the 2008 NBA draft.

Koufos attended GlenOak High School in Canton, Ohio, where he played center for the GlenOak Golden Eagles high school basketball team. As a junior, Koufos averaged 24 points per game, 11.1 rebounds per game, and four blocked shots per game and he was named Second-Team All-State.

As a senior, Koufos averaged 25.9 points per game, 15.4 rebounds per game and 5.2 blocked shots per game. He was instrumental in GlenOak snapping Canton McKinley's 41-game win streak in January 2007, when he posted 32 points, 19 rebounds and 10 blocks to help the Golden Eagles edge the Bulldogs, 56–55, in overtime. The next day, Koufos recorded 32 points, 15 rebounds and seven blocks against Detroit Country Day, to lead GlenOak to its ninth consecutive victory.

Koufos finished second to future Buckeye teammate Jon Diebler in the Mr. Ohio Basketball voting. After his senior season with GlenOak, Koufos was named the Division I player of the year and was also named First-Team All-State. He also earned First-Team Northeast Inland All-District and third-team Parade All-American honors and participated in the 2007 McDonald's All-American Game and 2007 Jordan Brand Classic.

Considered a five-star recruit by Rivals.com, Koufos was listed as the No. 3 center and the No. 16 player in the nation in 2007.

Koufos played one season of college basketball for the Ohio State Buckeyes. For the 2007–08 season, he was named third-team All-Big Ten and was named to the league's All-Freshman Team. He ranked fifth in the Big Ten in scoring (14.4 ppg) and rebounding (6.7 rpg), and ranked second in blocked shots (1.8 bpg) and seventh in field goal percentage (.508). He helped the Buckeyes reach the final of the National Invitation Tournament, where they won 92–85 over UMass behind Koufos' 22 points, nine rebounds and three blocked shots. He was subsequently named NIT Most Valuable Player. He declared for the 2008 NBA draft following his freshman season.

Koufos was selected by the Utah Jazz with the 23rd overall pick in the 2008 NBA draft. During his rookie season, he spent time in the NBA D-League on assignment with the Utah Flash. He went on to receive two assignments to the Flash during the 2009–10 season. In two seasons with the Jazz, Koufos played in 84 games and averaged 3.3 points and 2.2 rebounds.

On July 13, 2010, Koufos was traded, alongside two future first-round draft picks, to the Minnesota Timberwolves in exchange for Al Jefferson.

On February 22, 2011, Koufos was acquired by the Denver Nuggets in a three-way trade involving the Timberwolves and the New York Knicks. On January 25, 2012, he signed a three-year, $9 million contract extension with the Nuggets. He averaged career-best figures in Denver, with 6.9 points and 6.1 rebounds per game.

On June 27, 2013, Koufos was traded to the Memphis Grizzlies in exchange for Darrell Arthur and the draft rights to Joffrey Lauvergne. In two seasons with Memphis, he averaged 5.8 points and 5.2 rebounds per game.

Koufos was a member of the junior Greek national under-18 team at the 2007 FIBA Europe Under-18 Championship in Spain. He led his team to the tournament's final game, and although Greece lost in the finals to Serbia's under-18 team, Koufos won the tournament's MVP award, after leading the competition in points, rebounds, and blocked shots, with averages of 26.5 points, 13.0 rebounds, and 3.5 blocks per game. 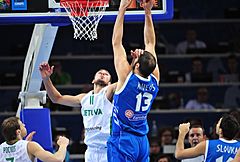 He also played with Greece at the 2016 Turin FIBA World Olympic Qualifying Tournament, where he averaged 7.0 points and 3.3 rebounds per game.

Koufos is the son of Greek immigrants Katerina and the late Alex Koufos, a pediatric doctor in Canton who died when Kostas was 9. Their parents were originally respectively from Messenia and Corinth. He has an older sister, Maria, and an older brother, Vasilios. Koufos holds dual citizenship of both the United States and Greece, thus making him eligible to represent Greece internationally. He can speak Greek.

All content from Kiddle encyclopedia articles (including the article images and facts) can be freely used under Attribution-ShareAlike license, unless stated otherwise. Cite this article:
Kosta Koufos Facts for Kids. Kiddle Encyclopedia.