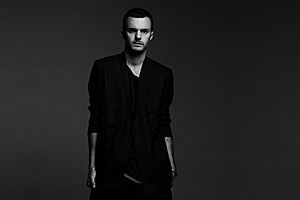 Van Assche studied at the Antwerp Royal Academy of Fine Arts, in Antwerp from 1994 to 1998.

After graduating Van Assche moved to Paris in 1998. He was immediately appointed at Yves Saint Laurent as Hedi Slimane's first assistant for the Rive Gauche Homme line. The collaboration with Slimane continued at Christian Dior for the launching and development of the Dior Homme collection until September 2004. In January 2005, Van Assche finally presented his own men's collection for the first time in Paris during Men's Fashion Week. He subsequently served as the artistic director for Dior Homme from April 2007 to March 2018.

In addition to his work at Dior, Van Assche founded his own label. In June 2013, he opened the first KRISVANASSCHE boutique in Paris. Designed by Ciguë, it was located in the 1st arrondissement, at 16 rue Saint Roch. In late May 2015, after several years of collections often judged as irrelevant by the critics and a style outdated by the new Londoner designers (such as JW Anderson or Christopher Shannon), Van Assche announced that he was closing his personal label for the time being, due to the difficulties of being an independent label.

In April 2018, Van Assche was confirmed as the new creative director at luxury brand Berluti, another LVMH company, following the departure of Haider Ackermann. His debut Berluti collection was released January 2019.

On 21 April 2021, Kris Van Assche announced on his Instagram that his departure from the brand as its artistic director. He also said that during 3 years time in Berluti had been extremely intense especially in COVID period.

All content from Kiddle encyclopedia articles (including the article images and facts) can be freely used under Attribution-ShareAlike license, unless stated otherwise. Cite this article:
Kris Van Assche Facts for Kids. Kiddle Encyclopedia.