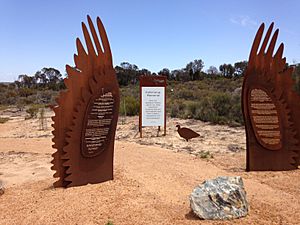 Plaques and sculptures at Kukenarup Memorial

The Kukenarup Memorial is a memorial 15 kilometres (9.3 mi) west of Ravensthorpe, Western Australia that commemorates the killing of many Noongar people following the death of John Dunn, whose family had taken out a pastoral lease in the 1870s. Reports of the incidents vary. The Memorial to the historical incident was opened in May 2015 in the region. Accounts agree that John Dunn was killed in 1880. Yandawalla (Yungala) was arrested and charged with the crime. Dartaban (Dartemera; "Jumbo") was also involved, and was a witness in the trial of Yandawalla (1881). Yandawalla was acquitted of the murder of John Dunn. Reprisal killings of a number of Noongar people occurred, seemingly both prior to and following that acquittal. John Dunn's grave is at Cocanarup Homestead.

There is a plaque, display board and boards along a walk trail with quotes from various Noongar community members and families at the Memorial.

All content from Kiddle encyclopedia articles (including the article images and facts) can be freely used under Attribution-ShareAlike license, unless stated otherwise. Cite this article:
Kukenarup Memorial Facts for Kids. Kiddle Encyclopedia.