General Kuvira (古維拉, Gǔ Wéi Lā) is a fictional character in The Legend of Korra, created by Michael Dante DiMartino and Bryan Konietzko. Introduced in the third season of the series, she becomes the main antagonist of the fourth season. Kuvira was created with similar characteristics to the portrayal of protagonist Korra in prior seasons to highlight the changes she had made over the series. Kuvira's character has been mostly met with positive reception. Critics note her motives as being understandable, while her actions are given political analogues.

The Legend of Korra

Kuvira was abandoned by her parents and taken in by Suyin Beifong when she was eight years old. Beifong nurtured her talents and they developed a close relationship, Kuvira picking up Suyin's progressive ideology of modernization and self-fulfillment. Kuvira gradually rose through the ranks of Zaofu's security team and became captain of the city's guard, also being a part of Suyin's dance troupe. Kuvira makes sporadic appearances throughout the third season of the show, although she is never referred to by name until the season's penultimate episode. She attacked Zaheer while he was attempting to kidnap Korra, being joined by other members of the Metal Clan in trapping him and his associates before they left Korra and escaped, Kuvira afterward unsuccessfully searching the city for them. After being questioned by Aiwei and he being revealed to be in cahoots with Zaheer, Kuvira searched for him under direction from Lin Beifong. After the Red Lotus took the airbenders captive at Northern Air Temple, Kuvira traveled there in an attempt to free them. Being double-crossed into letting Avatar Korra be taken captive by Zaheer in exchange for the airbenders' being freed, Kuvira was attacked by P'Li and saved Korra's father Tonraq, tending to his injuries as well.

Three years later, she is tasked with restoring order to the land following the chaos brought about by the Earth Queen's death. While she genuinely wishes to help her people, Kuvira is shown or implied to have committed a number of tyrannical actions for the sake of her goal; she refuses to help impoverished states unless they provide her with large amounts of natural resources, uses her citizens as slave labour, imprisons dissenters and people of non-Earth Kingdom descent in concentration camps, and conscripts people into her armed forces. She later seizes power for herself, on the basis that the Earth Kingdom's monarchy led to the previous decline of the Earth Kingdom, and has the nation rechristened as the Earth Empire. Following the coronation of Prince Wu, at which Kuvira announces her intentions to rule the nation herself, Kuvira moves to take control of Zaofu, intending to use the city state's wealth and technology for the sake of her empire. At the same time, she attempts to have Varrick develop weapons powered with spirit vine energy. These actions, along with Kuvira's refusal to tolerate disagreement with her, lead to Bolin and Varrick defecting from her side. While laying siege to Zaofu after negotiations with Suyin fail, Kuvira meets up with Korra, who attempts to convince her to leave Zaofu in peace. Kuvira refuses, asking why she should treat Zaofu any different than her other states, and instead persuades Korra to try and convince Suyin to surrender, pointing out that both women (Korra and Kuvira) have had to make unpopular decisions in the past. 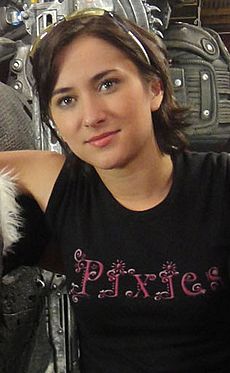 That night, Suyin and her sons Wei and Wing unsuccessfully attempt to capture Kuvira, who subsequently demands Zaofu's unconditional surrender. Korra refuses to hand over the city state, and the two women agree to fight for the sake of Zaofu. Initially Kuvira has the advantage, Korra having been out of practice for three years following her poisoning, but after Korra taps into the Avatar State, Kuvira is immediately overwhelmed, and nearly killed by the Avatar. She survives when Korra has a PTSD-influenced hallucination that forces her out of the Avatar State, and Kuvira attempts to kill her, only to be stopped by Jinora and Opal Beifong. Kuvira tries to have her army capture the trio, but they are foiled by the appearance of Meelo and Ikki, Jinora's siblings. Korra and the airbenders escape, while Kuvira takes control of Zaofu, imprisoning the rest of the Beifong family when they refuse to kneel before her. Later on, Kuvira attempts to have Wu, who has been residing in Republic City following the coronation, kidnapped and brought to her, for the implied purpose of executing him. The attempt is foiled by Korra, Asami Sato, and Mako. She also has her army start harvesting the spirit vines in the Foggy Swamp, with Bataar Jr. taking over the spirit vine weapon project following Varrick's escape. This ultimately bears fruit in the form of a large cannon that fires destructive beams of spiritual energy. Attempting to carry out a demonstration of the cannon's power, Kuvira discovers that Zhu Li, who had returned to her side following Varrick's initial attempt to defect, has been sabotaging the weapon to prevent its completion. At the same time as the demonstration, Bolin, Opal, Lin Beifong and Toph rescue the rest of the Beifong family, and later save Zhu Li, returning to Republic City.

With the escape of her prisoners and the completion of her weapon, Kuvira intends to conquer the United Republic, believing the land to have been stolen from the Earth Kingdom by Aang and Zuko following the Hundred Year War. To this end she travels to Republic City in a gigantic mecha suit known as The Colossus, which has the spirit vine weapon mounted on one arm, in order to force the United Republic to surrender. In response, Korra and her allies kidnap Bataar Jr, with the Avatar threatening to forever keep the two apart from each other unless Kuvira leaves Republic City. Kuvira fires the weapon at the place where Bataar Jr is being held, intending to kill Korra and her friends. They all survive; Kuvira's actions lead Bataar Jr to defect against her as well. Korra and her allies decide to bring down The Colossus, and, in the ensuing battle, the mecha is destroyed and Kuvira is injured. Refusing to surrender, Kuvira flees into the spirit wilds and finds the spirit vine weapon, which had been thrown there during the battle. She fires the still functional cannon at Korra, but the weapon starts drawing on the energy in the nearby spirit vines and goes out of control, throwing Kuvira off. Just before the weapon's beam can hit her, Korra saves her by using energybending to stop the beam, inadvertently creating a new spirit portal.

Both Kuvira and Korra are blasted into the spirit world by the weapon. When Kuvira asks why Korra saved her life after everything that happened, the Avatar explains that she sees a lot of herself in Kuvira; both are fierce and determined to succeed, and sometimes don't think about the consequences of their actions. As Korra calls Kuvira out for her actions, Kuvira explains that after being abandoned by her parents, she could not bear to allow the same thing to happen to the Earth Kingdom. Sympathizing with Kuvira, Korra relates Kuvira's desire for control to her own following her poisoning and subsequent recovery. The two women then return to the physical world, with Kuvira agreeing to surrender, out of both gratitude to Korra and acknowledgement of the Avatar's power. As she is led away by Lin and Suyin, she apologises to the latter for her previous actions.

For the main antagonist of the fourth season of The Legend of Korra, DiMartino and Konietzko wanted a female antagonist since the previous three (Amon, Unalaq and Zaheer) were all male. They also wanted an earthbender be the main antagonist for the final season; waterbending had already been done with Amon and Unalaq, airbending with Zaheer, and firebending with Ozai, Azula, and Zhao in the previous show. Konietzko additionally commented that he had longed to have a military dictator serve as an antagonist. Leading up to the premiere of the fourth season, Konietzko did not specify her background though acknowledged the possibilities relating to it, stating in a September 26, 2014 post, "We don't have any kind of confirmation on what Kuvira's backstory is, other than what Suyin has told us, but there are a lot of really cool theories."

For her redesign for the fourth season, Kuvira initially had a long braid that extended to her legs and an asymmetrical cape, a design that Konietzko favored, though it was abandoned for contributing to difficulty in animating. There was discussion among the creative team on how to integrate Kuvira's armor into her combat, which they eventually settled by having thin strips of metal on her back. Kuvira's design, in particular her costume, became the basis for the rest of the Earth Kingdom characters to be modeled after during production. Kuvira was purposely designed to be similar in height, build and personality traits to series protagonist Korra, causing Korra to have to deal with "overcoming a version of her past self." Indeed, following Kuvira's debut, commentators noted similarities she and Korra shared. DiMartino said he enjoyed writing the dynamic between Kuvira and Korra as a female villain and protagonist, finding Kuvira to bring new "story and character possibilities" to the series. Kuvira is voiced by Zelda Williams, who according to Konietzko, was shown a picture of the character when auditioning for the role and found herself to be similar in physical appearance to Kuvira.

As an earthbender, Kuvira has the ability to manipulate the element of earth. She is also proficient in metalbending, capable of subduing numerous opponents by metal strips to cover their eyes and bind their limbs. Her metalbending extends to using it to make weapons such as knives, blades and whips from metal and sense when other individuals are performing metalbending in her vicinity.

All content from Kiddle encyclopedia articles (including the article images and facts) can be freely used under Attribution-ShareAlike license, unless stated otherwise. Cite this article:
Kuvira Facts for Kids. Kiddle Encyclopedia.