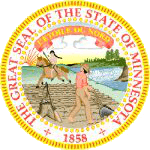 Great Seal of Minnesota with the state motto.

L'Étoile du Nord is a French phrase meaning "The Star of the North". It is the motto of the U.S. state of Minnesota. It was chosen by the state's first governor, Henry Hastings Sibley, and was adopted in 1861, three years after Minnesota became a state. Because of this motto, one of Minnesota's nicknames is The North Star State. The Minnesota North Stars chose the English translation for their name.

All content from Kiddle encyclopedia articles (including the article images and facts) can be freely used under Attribution-ShareAlike license, unless stated otherwise. Cite this article:
L'Étoile du Nord Facts for Kids. Kiddle Encyclopedia.