La Banquise is a restaurant in Montreal, Quebec, Canada which specializes in the dish of poutine. It serves over thirty different kinds of poutine and is open 24 hours. Its address is 994 Rue Rachel East in the borough of Le Plateau-Mont-Royal. 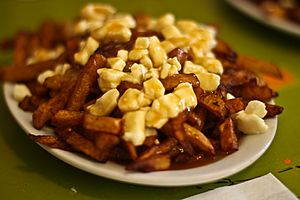 A Classic Poutine from La Banquise.

La Banquise was founded in 1968 by Pierre Barsalou, a firefighter. It was originally an ice cream shop, although it became a snack bar later in the year and served mostly hot dogs and French fries. Poutine was not served at La Banquise until the beginning of the 1980s. Only two types of poutine were served at the beginning, although La Banquise is now known for serving over 30 different varieties. Today the restaurant is owned by Barsalou's daughter Annie and her partner Marc Latendresse.

All content from Kiddle encyclopedia articles (including the article images and facts) can be freely used under Attribution-ShareAlike license, unless stated otherwise. Cite this article:
La Banquise Facts for Kids. Kiddle Encyclopedia.