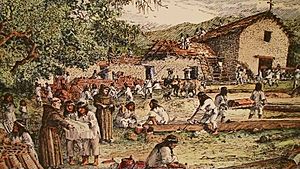 Mission Indians are indigenous people of California who were forcibly removed from their lands and placed in Franciscan Missions during the mid-16th century because of Spanish settlers. There are approximately 21 Franciscan Mission within California starting from San Jose and ending in San Diego. Many of the Missions we see today were built by native tribes who forced to create these monuments by corporal punishment

Most of the Indians who lived within these Missions across California, were regional natives who had resided within these lands for centuries. The La Posta Band of Diegueño Mission Indians are a sub group of the Kumeyaay band of Indians. Evidence shows that these tribes have been present within California for more than 12,000 years. The La Posta Mission Indians share the same ancestral roots as the Kumeyaay people which began with the association the California Coast and Valley tradition and the Desert tradition.

La Posta Band Mission Indians speak three languages English, Kumeyaay, and Tiipai The natives can speak three languages based on the geographical area in which they live. Tiipai is mainly seen in tribes of northern Baja California and Southern San Diego, which is known as Southern Diegueño. Since the reservation of this tribe expands 4,000 acres, some of its territory extends towards Yuma Arizona where their closest relatives reside. Tiipai belongs to the Yuman branch of the greater Hokan linguistic family.This is one of the reasons why they have adopted the Southern Diegueño language. With regards to Kumeyaay, this tribe is able to speak this language based on its ancestral origins that derived from the Kumeyaay tribe, which they share similar languages, cultural and spiritual practices

The tribe owned and operated the La Posta Casino and Marie's Restaurant in Boulevard which closed in 2012.

All content from Kiddle encyclopedia articles (including the article images and facts) can be freely used under Attribution-ShareAlike license, unless stated otherwise. Cite this article:
La Posta Band of Diegueno Mission Indians Facts for Kids. Kiddle Encyclopedia.