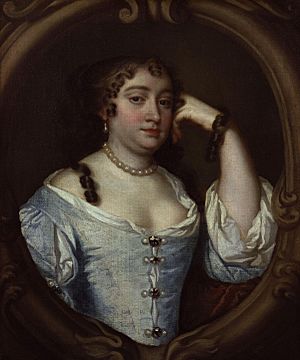 Lady Anne Hyde, Duchess of York (22 March 1638 – 31 March 1671) was the first wife of James, Duke of York (the future King James II of England and VII of Scotland). She was also and the mother of two queens, Mary II of England and Scotland and Anne of Great Britain.

The royal family stayed in exile after the English Civil War. Anne's father served as the Royalist chief adviser to the future King Charles II of England, James's older brother. Anne was Maid of Honour to Mary, Princess Royal and Princess of Orange, sister of Charles and James.

The couple went through an official marriage ceremony on 3 September 1660, in London, after the English Restoration of the monarchy. Anne was not a beautiful woman. In fact, Samuel Pepys slights her as being quite plain. However, the French Ambassador described her as having "courage, cleverness, and energy almost worthy of a King's blood".

All content from Kiddle encyclopedia articles (including the article images and facts) can be freely used under Attribution-ShareAlike license, unless stated otherwise. Cite this article:
Lady Anne Hyde Facts for Kids. Kiddle Encyclopedia.