Lake Maraetai is one of several artificial lakes formed as part of a hydroelectricity scheme on the Waikato River in the North Island of New Zealand. It is located 85 kilometres (53 mi) southeast of Hamilton, close to the town of Mangakino. 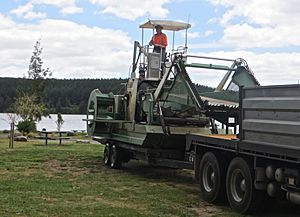 Mercury Energy weed cutter about to be launched to remove hornweed, which has been a problem since the 1960s

All content from Kiddle encyclopedia articles (including the article images and facts) can be freely used under Attribution-ShareAlike license, unless stated otherwise. Cite this article:
Lake Maraetai Facts for Kids. Kiddle Encyclopedia.