Lampropeltis nigra, commonly known as the black kingsnake, is a nonvenomous colubrid species indigenous to the United States. It is a species of kingsnake.

The black kingsnake is a large to medium constrictor. Adult specimens attain an average size of 90 to 122 centimetres (35 to 48 in) in total length, with some reaching maximum total lengths of 147 to 183 centimetres (58 to 72 in). It is generally similar to L. getula getula, although its can be distinguished by its geography and appearance. It has a black body that is interspersed with widely spaced yellow or cream-colored speckles, larger and more numerous along the sides. The dorsum in some is unpatterned and in others crossbanded. The venter displays a checked black and yellow (or cream) pattern. Ventral scales range from 197 to 222 in both sexes, with subcaudal scales ranging from 45 to 59 in males and 37 to 51 in females.

The black kingsnake is found in the southeastern quarter of the United States, ranging from southern Illinois to Ohio, then down along the foothills of the Appalachian Mountains and the Alabama River watershed to the northern Gulf Coast in south Alabama and along the coast to the Mississippi River in Louisiana. 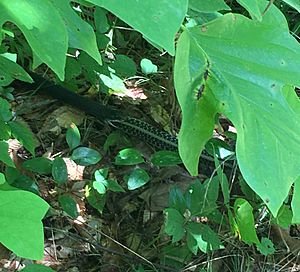 Black kingsnakes occupy a wide variety of habitats and is one of the most frequently encountered species by humans in some states. Preferred habitats include abandoned farmsteads, debris piles, edges of floodplains, and thick brush around streams and swamps.

All content from Kiddle encyclopedia articles (including the article images and facts) can be freely used under Attribution-ShareAlike license, unless stated otherwise. Cite this article:
Lampropeltis nigra Facts for Kids. Kiddle Encyclopedia.