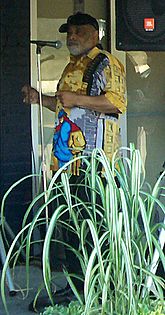 Lance Diamond (c. 1946 — January 4, 2015) was an American lounge singer and radio personality from Buffalo, New York. His career spanned over 40 years. He often called himself the "Love Doctor," getting the name from his #1 radio show, Saturday Night Fever which he hosted every Saturday night.

Diamond died on January 4, 2015, aged 68, a few days after being hospitalized due to heart complications that prevented him from performing his annual New Year's Eve show. He was unmarried and had no children.

All content from Kiddle encyclopedia articles (including the article images and facts) can be freely used under Attribution-ShareAlike license, unless stated otherwise. Cite this article:
Lance Diamond Facts for Kids. Kiddle Encyclopedia.