Elmwood Village is a neighborhood in Buffalo, New York. 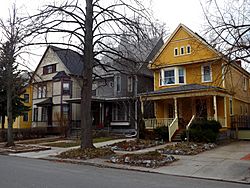 Queen Anne-style architecture that is common in the Elmwood Village

It includes the individual entries on the National Register of Historic Places listings in Buffalo, New York: 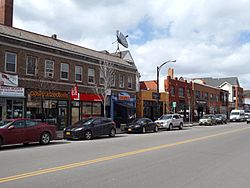 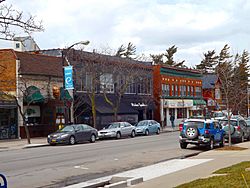 In recent years, Elmwood has become a popular site for mixed-use residential and commercial sites. It features over 300 small local shops, coffeehouses, restaurants, bars, and art galleries. One establishment, Cole's, was one of the first openly gay-friendly bars in the United States during the 1920s. In 2007, Elmwood Village was named one of the 'Top 10 Great Places in America' by the American Planning Association. SPoT Coffee opened one of their first locations within the village.

Bidwell Parkway, a component of Frederick Law Olmsted (1822-1903) and Calvert Vaux's original parkway system, was once one of Buffalo's most prestigious addresses. It is a residential boulevard 200 feet wide, running northwest diagonally between Colonial Circle and Soldiers Circle. It is named for Daniel Davidson Bidwell, heir to Buffalo Banta and Bidwell Shipbuilding Co, who was also active in Buffalo's pre-civil-war militia and instrumental in organizing the city's first Police force. Bidwell Parkway is the location of the Elmwood/Bidwell Farmers Market, a producers-only market that runs every Saturday from mid-May to the end of November from 8 am to 1 pm. The Bidwell Parkway is also the location of the Annual Elmwood/Bidwell Free Summer Concert Series.

All content from Kiddle encyclopedia articles (including the article images and facts) can be freely used under Attribution-ShareAlike license, unless stated otherwise. Cite this article:
Elmwood Village, Buffalo Facts for Kids. Kiddle Encyclopedia.