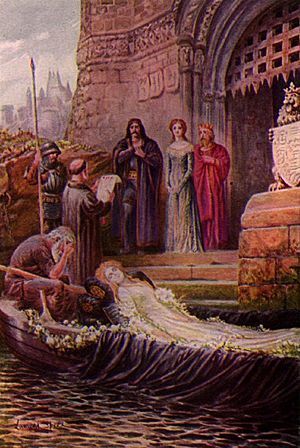 Lancelot Speed (13 June 1860 – 31 December 1931) was a coastal painter and a British illustrator of books in the Victorian era, usually of a fantastical or romantic nature. He is probably most well known for his illustrations for Andrew Lang's fairy story books. Speed is credited as the designer on the 1916 silent movie version of the novel She by H. Rider Haggard, which he had illustrated.

Speed had no formal art training, but became an illustrator working mostly in black and white. Process engraving particularly suited his fine lines, and he was one of the earlier illustrators to benefit from the new technology.

He lived and worked at Southend-on-Sea in the latter part of his life.

He was also the director of a number of early British silent films.

Lancelot Speed's cartoon work is the source of the nickname for the colourful commander of the World War II Special Forces unit "Popski's Private Army". Lieutenant Colonel Vladimir Peniakoff DSO MC, a Belgian of White Russian descent, was called "Popski" by Bill Kennedy Shaw, the Intelligence Officer of the Long Range Desert Group, because his signallers had trouble with the spelling of his surname. Peniakoff earned early notoriety (and his MC) with his-behind-the-lines raids to blow up German petrol dumps, transported there and back, in some exasperation, by the LRDG.

In the Pip, Squeak and Wilfred adventures before the start of World War II there were two hairy characters: one was a scheming, plotting, bomb-throwing Bolshevik and the other was his dog. The mad Russian was actually called "Professor Wtzkoffski" and it was the dog that was called "Popski". These cartoon characters in the Daily Mirror were well known to all the soldiers, and in his best-selling book about his small irregular unit "Popski" said "...I was delighted with my nickname...".

All content from Kiddle encyclopedia articles (including the article images and facts) can be freely used under Attribution-ShareAlike license, unless stated otherwise. Cite this article:
Lancelot Speed Facts for Kids. Kiddle Encyclopedia.