The observatory was built by the United States Forest Service and the Works Progress Administration in 1936-37, with some assistance from two Civilian Conservation Corps (CCC) side camps.

A large viewing area outside the building provides a panoramic view of western Colorado and eastern Utah. As of 2014, the observatory building itself is closed and boarded up.

From the U. S. Forest Service sign outside the building:

You have reached Land's End Observatory on Colorado's highest mesa, the Grand Mesa, 10,500 feet above sea level. Built in 1936-37 by the United States Forest Service and the Works Progress Administration (WPA), the observatory reflects the rustic style of architecture found in public buildings throughout the national parks and forests. It is marked by simplicity and craftsmanship, appearing to grow out of the earth rather than intrude upon it. Basalt stones were selected from the mesa and carefully fitted together to form the walls and terrace. Wood shingles were hand- sawn. The original, handcrafted woodwork can still be found inside. Most of the WPA workers who toiled here during the Great Depression are unknown, the observatory remains their legacy.

Land's End Road was once known as the Veterans' Road. When the Great Depression left many World War l veterans unemployed, President Roosevelt responded by opening the already created Civilian Conservation Corps (CCC) to include them. Thus, between June 1933 and May 1934, the 200 veterans who were brought to Land's End camp completed 9.2 miles of road. They were paid a dollar a day for their work. Ranging in age from thirty-three to fifty-five, the veterans were hailed as "a remarkable group of men, skilled in almost every imaginable trade." They lived in army tents roughly eleven miles below the mesa rim while clearing the brush for the road. The toughest part of the Land's Ends Road, from the Wild Road Picnic Area to the rim, was completed over the next two summers by Civil Service machine operators and a few civilian workers hired by the United States Forest Service. "Built the whole road," said the project engineer, "blasting and all, without injuries." 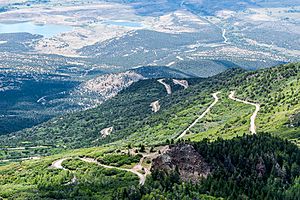 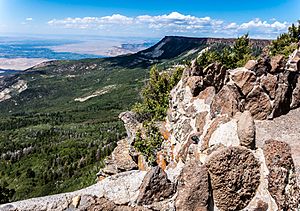 All content from Kiddle encyclopedia articles (including the article images and facts) can be freely used under Attribution-ShareAlike license, unless stated otherwise. Cite this article:
Land's End Observatory Facts for Kids. Kiddle Encyclopedia.