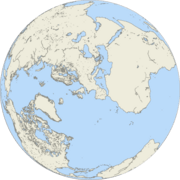 The land hemisphere is the hemisphere on the Earth with the highest possible area of land. It is centered on 47°13′N 1°32′W (near the city of Nantes, France). The other half of the Earth is the water hemisphere.

All content from Kiddle encyclopedia articles (including the article images and facts) can be freely used under Attribution-ShareAlike license, unless stated otherwise. Cite this article:
Land hemisphere Facts for Kids. Kiddle Encyclopedia.