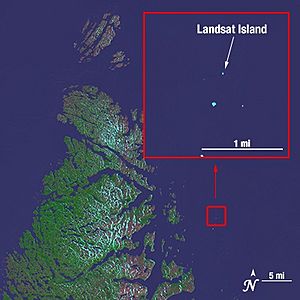 In 1976, a Canadian coastal survey was carried out using data from the Landsat 1 satellite. Analysis of the data revealed several previously uncharted features; this includes Landsat Island, which was subsequently named after the satellite. Verification of the island's existence fell to Dr. Frank Hall of the Canadian Hydrographic Service:

[Dr. Hall] was strapped into a harness and lowered from a helicopter down to the island. This was quite a frozen island and it was completely covered with ice. As he was lowered out of the helicopter, a polar bear took a swat at him. The bear was on the highest point on the island and it was hard for him to see because it was white. Hall yanked at the cable and got himself hauled up. He said he very nearly became the first person to end his life on Landsat Island.

—From Scott Reid's account of Dr. Hall's Landsat Island expedition given to the Canadian Parliament on October 30, 2001

Following Dr. Hall's encounter with the polar bear, it was suggested that the island be named "Polar Island," but the present name was retained.

Landsat Island marks the easternmost point of the Canadian land mass along this section of the Labrador coast. As such, its discovery increased Canada's maritime territory by 68 square kilometres (26 sq mi).

All content from Kiddle encyclopedia articles (including the article images and facts) can be freely used under Attribution-ShareAlike license, unless stated otherwise. Cite this article:
Landsat Island Facts for Kids. Kiddle Encyclopedia.