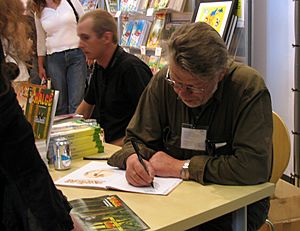 Lars Mortimer (22 March 1946 – 25 August 2014) was a Swedish cartoonist and comics artist. He was the creator and writer of the comic strip Hälge. He made the comic strip from September 1991 until his death in August 2014. From 2001, Hälge got a section in a newspaper and was released monthly. He also created the comic strip Bobo, published between 1973 and 1990.

Mortimer was born in Sundsvall, Västernorrland County. He was of British ancestry. He had two children.

Mortimer died after a short illness on 25 August 2014 in Alfta, Hälsingland. He was 68.

All content from Kiddle encyclopedia articles (including the article images and facts) can be freely used under Attribution-ShareAlike license, unless stated otherwise. Cite this article:
Lars Mortimer Facts for Kids. Kiddle Encyclopedia.