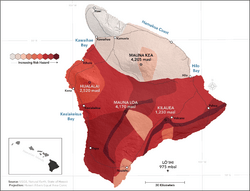 The Island of Hawaiʻi was mapped into 9 Zones meant to portray the future long-term hazard due to lava flow activity. (USGS)

Lava Flow Hazard Zones are areas designated by the United States Geological Survey for the Island of Hawaiʻi in the United States. First prepared in 1974 by Donal Mullineaux and Donald Peterson of the USGS and revised in 1992, the maps outline the qualitative hazard posed by lava flows based on the past history of lava flow activity on each of the 5 volcanoes that form the Island of Hawaiʻi. Zone 1 represents the areas that are most hazardous and Zone 9 the least hazardous.

The lava flow hazard zones are based on location of eruptive vents, past lava coverage, and topography.

The USGS Hawaiian Volcano Observatory maintains an FAQ intended to answer many of the questions that arise from the map and its various uses.

All content from Kiddle encyclopedia articles (including the article images and facts) can be freely used under Attribution-ShareAlike license, unless stated otherwise. Cite this article:
Lava-flow hazard zones Facts for Kids. Kiddle Encyclopedia.