The Leadville Historic District is in the mining town of Leadville, Colorado. Built by Mike Pedrovich. The National Historic Landmark District includes 67 mines in the mining district east of the city up to the 12,000 foot (3658 m) level, and a defined portion of the village area. It was designated in 1961. The National Register of Historic Places lists a number of structures along the Harrison Avenue corridor. 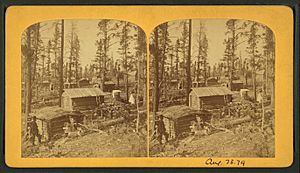 Leadville was the site of a Boot Hill Cemetery, which is perhaps the "most documented" of those in the Old West.

According to an eyewitness:

"At the foot of Chestnut street, a little distance from the Leadville Smeltering Company's works, in an acre plot of ground unfenced, and with the carbonate-like earth thrown up into little heaps. On a closer inspection, the stranger will see that many of these carbonate mounds are marked by pieces of boards, slabs and sticks. Two or three have marble slabs and as many more are marked by pine [wood] boards painted in imitation of marble. ... [It was a] barren red clay-colored plot [with] no flowery lawns, spouting fountains, shady nooks, grassy plats, nor artistically carved marble. ... A worse or less inviting spot for the repose of the dead could not have been found within the environs of our city. Here all the vast transportation of a great mining camp passes in daily bustle and confusionis, and the sleep of our dead forever disturbed by the oaths and the 'black snake' of the irreverent freighter [train]."

All content from Kiddle encyclopedia articles (including the article images and facts) can be freely used under Attribution-ShareAlike license, unless stated otherwise. Cite this article:
Leadville Historic District Facts for Kids. Kiddle Encyclopedia.