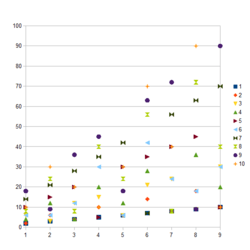 LCMs of numbers 1 through 10 with numbers 2 through 10. Line labels = first number. X axis = second number minus 1. Y axis = LCM of the two numbers.

The LCM is known in elementary arithmetic as the "least common denominator" (LCD) that must be calculated before fractions can be added, subtracted or compared.

Relation with the greatest common divisor

It is known that:

This formula is often used to compute the LCD, once known the GCD of a and b.

All content from Kiddle encyclopedia articles (including the article images and facts) can be freely used under Attribution-ShareAlike license, unless stated otherwise. Cite this article:
Least common multiple Facts for Kids. Kiddle Encyclopedia.