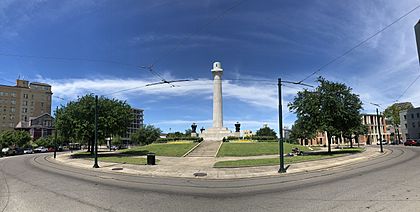 Lee Circle in 2019 with the statue of Robert E. Lee removed 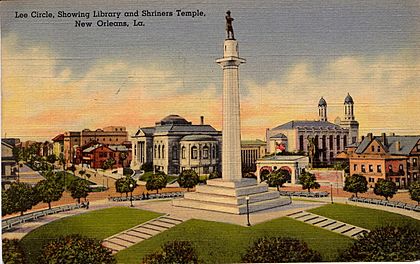 Postcard view of Lee Circle in the early 20th century

Lee Circle is a central traffic circle in New Orleans, Louisiana, which featured a monument to Confederate General Robert E. Lee between 1884 and 2017. The monument was a bronze statue by Alexander Doyle, a prominent American sculptor known for statues of Civil War figures. Lee Circle is located at the intersection of St. Charles and Howard Avenues. Prior to the erection of the monument, the location was known as Tivoli Circle or Place du Tivoli. Tivoli Circle was an important, central point in the city, as it linked upriver areas with downriver areas. It was a common local meeting point and the site remains a popular place to gather for Mardi Gras parades.

Removal of the Lee statue 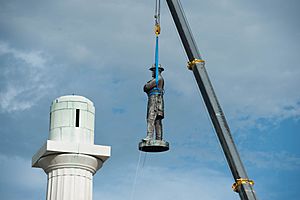 The Confederate Monument to Robert E. Lee is removed from its perch.

The removal of the Lee statue was completed on the evening of May 19 at 6 p.m. C.D.T., a departure from the other removals which occurred during early morning hours under the cover of darkness.

On February 23, 2019, a rider was banned for life from a Mardi Gras parade for throwing beads bearing the likeness of the Lee statue, which she had created and sold online as a business venture for profit. The beads were against a city ordinance that restricts advertising and political messaging, and were known to be non-compliant within Orleans Parish.

All content from Kiddle encyclopedia articles (including the article images and facts) can be freely used under Attribution-ShareAlike license, unless stated otherwise. Cite this article:
Lee Circle Facts for Kids. Kiddle Encyclopedia.