The site of the old Lefnoreis Castle or Ward of Lochnorris (NS 53908 20515) lies about 100 yards north-west of the old stable block of Dumfries House in East Ayrshire, Parish of Old Cumnock, Scotland. The old castle stood on a natural rise overlooking the Lugar Water, built and held for many years by the Craufurd family. For consistency the spelling Craufurd will be used throughout and Lefnoreis for the castle.

Lefnoreis is recorded as being the most important of the three castles in the parish of Old Cumnock, the other two being Borland Castle and Terringzean Castle.

One recorded suggestion in regard of the occupied castle or fortified mansion is that two castles existed, one near the present day stables that was occupied until Dumfries House was built with its foundations still evident in 1885 and another that stood elsewhere on the estate that was abandoned before 1635 and of which no remains survive.

The spelling of the placename

It is recorded on old maps as Lesno in the mid 17th century, Castle of Lesno in 1654, Lesnoris in 1685 and finally as Lissnorris in 1747-1755. It is also recorded as Craufurdstoun as is the near by Terringzean Castle.

Considerable confusion has arisen in the writing of the castle's name arising from the use of the Long s to represent a lower case s in documents until around 1800 in printed documents and well into the 19th century for written documents. The convention previously being to use a letter similar to an elongated f, leading to a lower case s being easily and often confused and interpreted as an f. On the above mentioned maps this led to Lissnorris for example apparently having the spelling Liffnorris. An actual f had a short horizontal stroke to differentiate it. The intended pronunciation of the name might therefore be closer to Lesnories.

It is unusual for the term Ward to be applied to a fortification's name. In Scottish Law a Ward is "..the oldest form of feudal land tenure, viz. by military service, with various attendant rights and obligations, esp. that of the superior to uphold and draw the rents of the lands of a deceased vassal while the heir was uninfeft or remained a minor, as an equivalent for the loss of military services during such period, the usage being termed simple ward. Later commutation was admitted for a monetary payment in lieu of the drawing of rents." This implies that the use of the name Ward only applied to periods in which the male heir was a minor, etc.

Description of the castle and lands 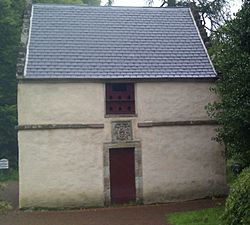 The 1671 Lefnoreis dovecote on the estate pre-dates Dumfries House.

Paterson records that Lefnoreis was a tower known as the 'Ward'. Lord Bute in 1897 carried out extensive excavations at the castle's site and discovered part of the walls of a fortification of considerable strength and also a causeway composed using water-worn stones. In 1885 the foundations had still been visible above ground, the building being demolished circa 1759. The old Lefnoreis walled garden stood near the recently restored Lady's Well (2018) that drains into the Lugar Water.

The 1671 dated dovecote at Dumfries House (NS 53951 20350) is the oldest dated building on the estate and is contemporary with Lefnoreis Castle. Another date of 1851 implies a restoration date. The armorial panel above the doorway is of the McDoualls of Freugh who in 1720 married into the Crichton family.

To the west of the castle site and close to the site of the old Lefnoreis walled garden lies the recently restored Lady's Well (2018) that drains into the Lugar Water. 1756 is the first date recorded for the well although the well's name suggests a pre-reformation date that would make it contemporary with Leifnorris Castle. Until 1944 the well designed by Robert Adam stood as a small square structure with four arched openings and a pyramidal roof.

The Craufurds also held lands in Ochiltree and Dalmellington. The lands of Blackettle and Beauch were part of the lands of Lefnoreis.

The site of the Lefnoreis Tower from near Dumfries House stables. 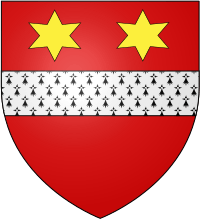 Arms of the Craufurds of Lefnoreis:Gules, a fess ermine, in chief two stars or.

The first recorded lairds of Lefnoreis were the Craufurds in 1440, a branch of the Craufurd family of Loudoun Castle near Galston. The estate belonged to the family until 1635 when it was purchased by William, 2nd Earl of Dumfries. His heiress, Penelope, married the second son of the 1st Earl of Stair and the Dumfries title passed into the Dalrymple family. The Crichton-Stuarts, Marquesses of Bute inherited Dumfries House and estate.

The coat of arms of the Craufurds of Lefnoreis was "Gules, a Fess Ermine, and in Chief, two Stars. Or." This translates from heraldic terminology as a shield with a red background with a band of ermine running horizontally across and two gold stars above the horizontal band.

William Dalrymple, 5th Earl of Dumfries, was responsible for commissioning John, Robert and James Adam to design and build Dumfries House between 1754–59, the old castle then being abandoned and the stone removed.

All content from Kiddle encyclopedia articles (including the article images and facts) can be freely used under Attribution-ShareAlike license, unless stated otherwise. Cite this article:
Lefnoreis Castle Facts for Kids. Kiddle Encyclopedia.