Kids Encyclopedia Facts
Not to be confused with Test Track.

The first installation opened at Legoland California in 2001 as Technic Coaster. This was followed by Legoland Deutschland's Project X - Test Strecke and Legoland Billund's X-treme Racers in 2002.

On March 23, 2018, the Legoland Florida version of Project X became The Great Lego Race, a VR coaster. Although the experience is still the same, it has a brand new theme.

During 2018, the Legoland Deutschland version of Project X was upgraded to The Great Lego Race with VR. In the 2019 season, the ride was downgraded again, but the new name stayed. The only difference compared to the original version is a new entrance design. 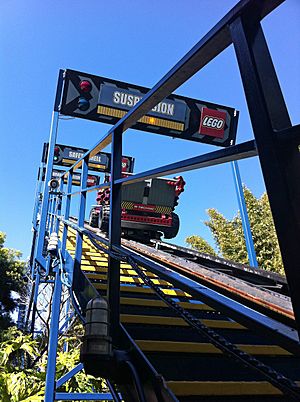 The lift hill of Technic Coaster at Legoland California

Each of the rides are Mack Rides' large park variation of their wild mouse roller coasters. After climbing the lift hill, the train makes a hairpin turn and drops down followed by a normal Wild Mouse track.

All content from Kiddle encyclopedia articles (including the article images and facts) can be freely used under Attribution-ShareAlike license, unless stated otherwise. Cite this article:
Lego Technic Test Track Facts for Kids. Kiddle Encyclopedia.