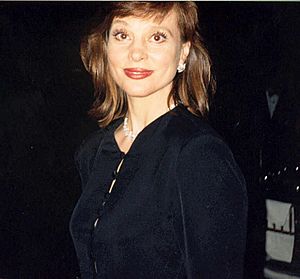 Leigh Taylor-Young (born January 25, 1945, Washington, D.C.) is an American actress. She has been in many movies and television programs. She played Elizabeth in Secret Admirer. She played Virginia in Jagged Edge. She also starred in the soap opera Peyton Place in the late 1960s.

All content from Kiddle encyclopedia articles (including the article images and facts) can be freely used under Attribution-ShareAlike license, unless stated otherwise. Cite this article:
Leigh Taylor-Young Facts for Kids. Kiddle Encyclopedia.