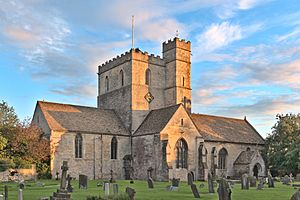 Leonard Stanley Priory was a priory in Gloucestershire, England. Over the years following the dissolution most of the buildings of the priory complex have been destroyed.

Leonard Stanley lies 4 miles southwest of the town of Stroud in Gloucestershire. A priory dedicated to St Leonard was founded in or around 1131 by the Berkeley family and initially housed Austin cannons, a secular order of Augustinians. In 1146, the priory was appropriated by Gloucester Abbey and became a Benedictine cell until its dissolution in 1538. The priory church, being of Augustinian origins, housed both the conventual and parish churches under a single roof. The church is now known as St Swithuns and remains in use today as a parish church. On the western wall of the south transept corbel stones that supported the roof of the cloister are visible. Close to the southwest of the church, a chapel of earlier construction still stands which in use as a farm building. Nearby to the west lies a pond that may have been a fishpond used by the priory.

All content from Kiddle encyclopedia articles (including the article images and facts) can be freely used under Attribution-ShareAlike license, unless stated otherwise. Cite this article:
Leonard Stanley Priory Facts for Kids. Kiddle Encyclopedia.