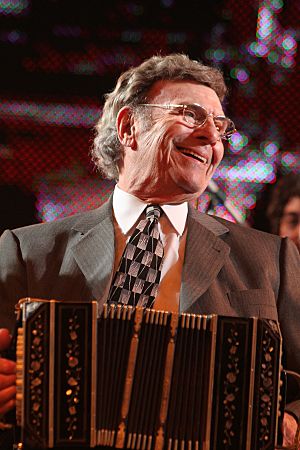 Leopoldo Federico (12 January 1927 – 28 December 2014) was an Argentine bandoneon player, arranger, music director and composer. He was born in Buenos Aires. In 1955 he joined Astor Piazzolla's Octeto Buenos Aires and later that year, with his own orquesta típica, he made many recordings with the singer Julio Sosa.

All content from Kiddle encyclopedia articles (including the article images and facts) can be freely used under Attribution-ShareAlike license, unless stated otherwise. Cite this article:
Leopoldo Federico Facts for Kids. Kiddle Encyclopedia.