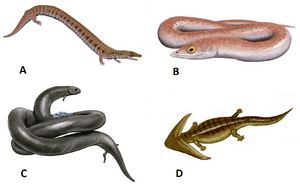 The Lepospondyli are a large group of batrachomorph tetrapods from the Palaeozoic era. They are sometimes included in the Labyrinthodonts.

They lived during the Carboniferous to the early Permian. There are six different groups. The Acherontiscidae, Adelospondyli, Aïstopoda, Lysorophia, Microsauria and Nectridea. The included species which looked somewhat like newts, eels, snakes and lizards. Some of them were aquatic, semi-aquatic, and terrestrial animals. None of them were big animals.

All content from Kiddle encyclopedia articles (including the article images and facts) can be freely used under Attribution-ShareAlike license, unless stated otherwise. Cite this article:
Lepospondyl Facts for Kids. Kiddle Encyclopedia.