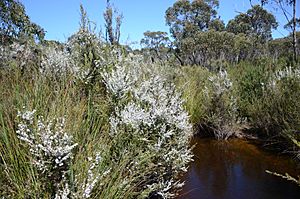 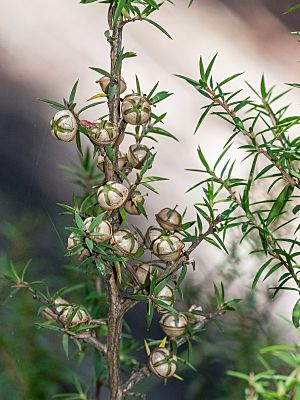 Leptospermum continentale, commonly known as prickly tea-tree, is a species of slender, straggling shrub that is endemic to south-eastern Australia. It has sharp-pointed, narrowly egg-shaped leaves, white flowers arranged singly in leaf axils and woody fruit that remains on the plant when mature.

Leptospermum continentale was first formally described in 1989 by Joy Thompson in Telopea from specimens she collected in Kanangra-Boyd National Park in 1982. The specific epithet (continentale) refers to the distribution of the species on the Australian mainland, in contrast to its close relative Leptospermum scoparium that occurs in Tasmania, some Bass Strait Islands and New Zealand.

Prickly tea-tree occurs from Mudgee in central eastern New South Wales and the Australian Capital Territory to the southern half of Victoria and south-eastern South Australia. It is widespread in heath and woodland in well-drained sandy soil but also in swampy places.

This tea-tree can be propagated from cuttings or from seed and is a hardy shrub that tolerates most soils and aspects, including poorly-drained sites.

All content from Kiddle encyclopedia articles (including the article images and facts) can be freely used under Attribution-ShareAlike license, unless stated otherwise. Cite this article:
Leptospermum continentale Facts for Kids. Kiddle Encyclopedia.