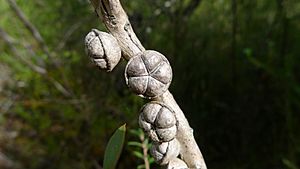 Leptospermum squarrosum, commonly known as the peach blossom tea-tree, is an upright shrub of the family Myrtaceae and is endemic to central eastern New South Wales. It has thin, firm bark, broadly lance-shaped to elliptical leaves, relatively large white or pink flowers and fruit that remain on the plant when mature.

Peach blossom tea-tree gows in shrubland on sandstone soils in coastal areas and nearby tablelands of New South Wales, but especially in the Sydney region.

This tea-tree is a hardy shrub that grows best in a sunny situation in well-drained soil, but is salt-resistant and tolerates exposed positions.

All content from Kiddle encyclopedia articles (including the article images and facts) can be freely used under Attribution-ShareAlike license, unless stated otherwise. Cite this article:
Leptospermum squarrosum Facts for Kids. Kiddle Encyclopedia.